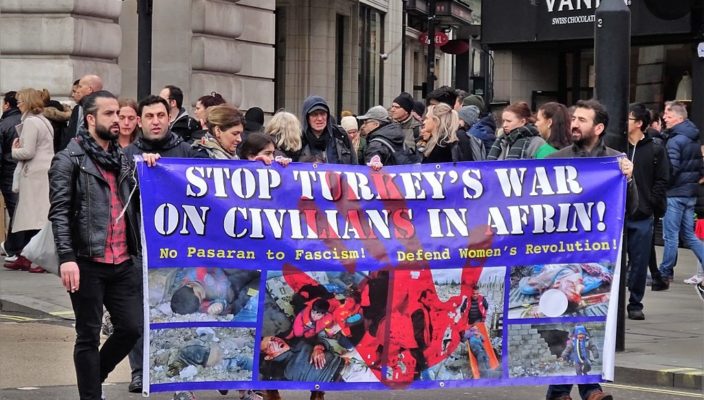 Daniel Siud, President of the Defense of Democracy, Freedom and Human Rights Committee, presented a report to the International Forum on Demographic Change and Ethnic Cleansing in Afrin which is going on in Amude.

The report was read by Mesum Ibrahim and details the violation of international laws during the attacks and occupation of Afrin by the Turkish state.

The report also criticised the silent of the international community.

“The agreement Turkey, Russia and Iran reached was to relocate the mercenaries in Idlib – said the report – and this was aimed at fighting the YPG.”

The crimes committed by the Turkish state and their mercenary allies are listed in 11 items:

4-Killing and attack on funerals,

These crimes were in open violation of the Hague Convention, the Geneva Convention and UN resolutions and amount to crimes against humanity, concluded the report which ended with the following demands:

1 – The occupying Turkish army and its mercenary allies must withdraw from all the areas they occupied in Syria, beginning with Afrin.

2 – The results of the violations of rights of the occupying Turkish state and the military operations against Afrin (attacks on Syrian civilians, forced displacement and humanitarian damage) should be exposed.

3 – The fate of the kidnapped people should be disclosed, and all prisoners, women and men in the hands of the occupying Turkish army and mercenary groups should be released unconditionally. Furthermore, the damage suffered by the civilians kidnapped and forced to flee should be compensated.

4 – The fate of the disappeared people should be urgently disclosed; the identities of those who have been killed for political and non-political reasons should be disclosed.

5 – All rights violations and brutalities occurred since the Turkish state occupied Afrin must be exposed. Those involved in the killing or injury of civilians should be tried in international and domestic courts. A committee should be established with the participation of independent, transparent, human rights organizations and women’s rights defenders.

6 – Civil society organizations and human rights organizations in Syria should document the crimes committed by the Turkish occupation army in Afrin. In addition, the prosecution of those responsible of crimes in Afrin (Turkish or cooperating Syrians) should be persecuted and action should be taken to bring them to justice.

7 – Those who were forced to flee from their lands and homes should be facilitated in their return to Afrin. It should be guaranteed that the people of Afrin will be able to develop their social and economic activities, and that their homes and property will not be confiscated. In addition, mines in the area should be removed.

8 – All relevant institutions and organizations should act to meet the vital, economic and humanitarian needs of residents and displaced persons of Afrin.

9 – Work must be carried out for the people of Afrin who have been subjected to torture and ethnic genocide, and whose rights have been violated by the Turkish army. In addition, the changing of the demographic structure of the region promoted by the occupying Turkish army to prevent and counter the co-existence system implemented in Afrin should be stopped and reverted.

The Research Center for Human Rights Violations in Northern Syria presented a report on crimes against humanity committed by the Turkish state in northern Syria.

The Turkish state continues to commit crimes in Afrin together with terrorist groups linked to it, said the report.

“From torture to kidnapping and killing, all kinds of violations and brutality are applied to people. Not only these, but also all kinds of cultural and physical genocide continue to be implemented in Afrin.”

The report states that the Turkish state committed crimes against humanity and added: “In order to implement the demographic change in the region, people have been clearly and forcefully displaced.”

“150 civilians including 15 women and 22 children were killed. 4,200 people have been kidnapped or detained; 900 people were injured by various explosives or because of torture; 75 civilians were killed as a result of inter-mercenaries clashes. Furthermore, 45 training centers were turned into military bases. Many homes were confiscated and many others were converted into prisons. Many houses belonging to citizens were burned down or destroyed.

The occupying Turkish state carried out 22 air strikes on civilian areas. Some 1,200 graves were destroyed, and the return of the people to Afrin was prevented.

Yazidi people were forced to convert to islam, money were ‘collected’ from the people under the name of ‘zakat’.

Agricultural activities run by local people were not allowed and the olive trees fields, which are the basis of the regional economy, were confiscated.