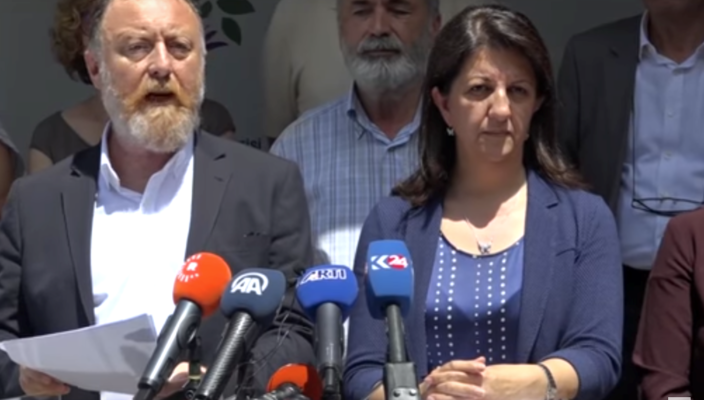 Speaking at the Turkish Defense Industry Summit, Erdoğan has announced that an operation would begin within days towards the East of Euphrates in North Syria

As local elections on March 31 draw nearer President Erdoğan once again puts forth pro-war and Middle East policies that he has used to consolidate nationalist voters.

Speaking at the Turkish Defense Industry Summit, Erdoğan has announced that an operation would begin within days towards the East of Euphrates in North Syria. Yesterday, immediately after this speech, he continued his election campaign by ordering the bombing of the surroundings of Sinjar and Makhmur.

While in Afrin, one of the regions Erdoğan claims he has “made secure”, local people are still trying to cope with the heavy consequences of the occupation, and the current aggressive discourse is merely a sign of new destruction and suffering. Let’s not forget, nearly 200 thousand people have had to leave their homes, and hundreds of people lost their lives in Afrin. Historical sites that are under the protection of UNESCO, agricultural areas, especially olive groves, the holy sites which are sacred for various religious identities and the dams supplying water to the region have been destroyed. In Afrin, gangs have made life a nightmare for the local people.

While the people of the region continue to suffer from this destruction, Erdoğan’s latest statement, which can only be perceived as the announcement of a new assault, is unacceptable from humanitarian, legal and political perspectives.

Erdoğan is not targeting ISIS or its gangs, but the Kurdish and Arab peoples and their allies who have been fighting against the barbarity of ISIS for years.

This destructive and aggressive attitude, repeated before each election, will only lead to new conflicts and crises. At the precise moment when a political and democratic solution to Syria’s war has been achieved to a certain degree, international and democratic forces should not fall into AKP government’s trap. The warmongering that Erdoğan aims to use for his local election campaign will lead to grave and irreparable consequences, and deeply hurt the intended target of regional peace.

President Erdoğan and his government should abandon this irrational stance which will lead to destruction and suffering in the region. We urge the national and international public to show alertness towards such threats and not to remain silent.