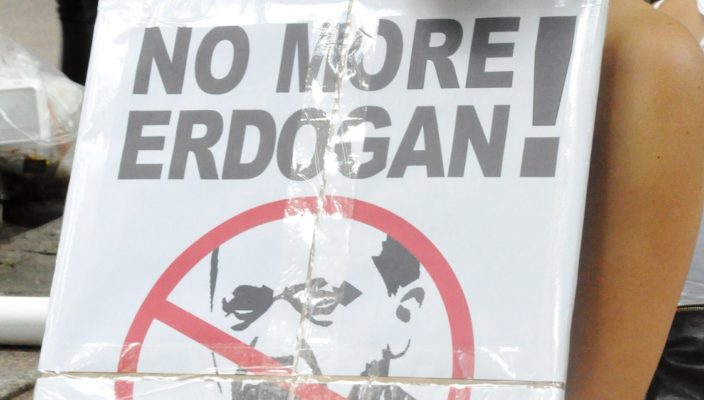 “Our preparations and plans [for an operation] are done, we will soon bring down the terror formation east of the Euphrates…” Turkish President Recep Tayyip Erdoğan

As if madness knows no end (nor the scheming minds of politicians intent on creating the conditions for it) Wednesday, December 12, Turkey’s president, Recep Tayyip Erdoğan, announced plans for his new military adventure against the Kurds, media reported…

As in Afrin earlier this year it is the Syrian Kurdish militia known as the People’s Protection Units (YPG), that President Erdoğan is afraid of and is willing to roll NATO’s second largest (after the U.S.) war machine into action through countless peaceful villages and over the dead bodies of innocent civilians to satisfy his paranoia that the Kurds are taking over the Middle East – as a first stop on the way to world domination.

Despite the fact that the Kurds and their allies in the SDF are the people who have sacrificed the most to end the evil empire of the Islamic State, the silence that surrounded the massacres in Afrin earlier this year brought shame to the rhetoric of a ‘world order’ and once again sadly showed the redundancy of the United Nations Security Council as well as the human rights rhetoric of most of the NATO countries.

What is now being described as the attempt at a neo Ottoman resurgence in  the midst of chaos and instability, Turkey’s push into Syria has so far resulted in two cross-border campaigns against the Kurd’s efforts to protect their people and develop peaceful communities; the earlier one, in 2016, “Operation Euphrates Shield” began in the summer of 2016 and was an eight-month operation that ended in March 2017. Earlier this year Turkey launched its murderous offensive against Afrin, “Operation Olive Branch”. Both of these military adventures with an enormous cost to the civilian population took place west of the Euphrates river.

There is no doubt President Erdoğan is intent on destroying the Kurdish autonomous region, the Democratic Federation of Northern Syria that straddles “his” border – if he is allowed get away with it.

The cynicism of the major powers vying for status in the region, in particular the United States and Russia, have done nothing to curb his ambitions and, interestingly enough, this time his threats would now appear to directly target US military personnel involved in the struggle against Islamic State/Daesh. One might be excused for wondering if he is now hoping that President Putin (and Hassan Rouhani) might give him a hand in forcibly evicting the US military machine from Northern Syria?

Turkey’s earlier agreement with the US in relation to the Kurds in Manbij,  did not seem to satisfy President Recep Tayyip Erdoğan’s need for influence in the region  and he has constantly criticised his NATO ally for its alliance with the one force that was willing to take on ISIS. This contrasts with Turkey’s record in the same fight where it is clear now that not alone did Turkey not contribute significant resources to fight the Islamic Caliphate but rather colluded and actively supported its military campaign of rape, beheadings and terror. Turkey currently mobilises other Islamic groups under the name of the Turkish FSA that commentators have pointed out seldom show little difference with disbanded Al Qaeda and ISIS/Daesh groups… all this with a  smile on the president’s face and thousands of Kurdish children either dead, orphaned or surviving in refugee camps with no prospect of returning to their homes and villages destroyed by the cream of NATO technology – and our own implicit support as part of the NATO alliance or sphere of influence.

“We expressed that we will launch an operation east of the Euphrates within a matter of days to save it from a separatist terrorist organization,” said Erdogan, referring to the terrorist PKK/YPG without mentioning it by name.” (Andalou)

Erdoğan’s threat, given at a Turkish Defence Industry Summit in Ankara, also follows recent U.S. moves to set up observation posts in northern Syria, despite Turkey’s objections. Turkey says the observation posts are aimed at protecting the YPG, while the U.S. says the posts were established to address Turkey’s security concerns.

“We know that the aim of the radar and observation posts set up by the United States (east of the Euphrates) is not to protect our country from terrorists, but to protect the terrorists from Turkey,” Erdoğan said.

“We will begin our operation to rescue the east of the Euphrates from the separatist organization within a few days,” Erdoğan said. “Our target is not the American soldiers, it is the terror organizations that are active in the region.”

Andalou, Turkey’s Press Agency, also said Turkey has sent convoy of troops and military equipment to the border with Syria  as reinforcements; all reminiscent of the build-up that preceded the invasion of Afrin.

A spokesman for the so-called Syrian National Army, the Turkish-backed rebel force in northwest Syria, said up to 15,000 Syrian rebels are ready to join the offensive:

“It will be in Manbij and Tel Abyad and Ras al-Ayn,” he said, referring to towns about 200 km apart near Syria’s northern border.

On Friday 14th December Turkish President Tayyip Erdoğan repeated his threat in an address to members of the Organization of Islamic Cooperation (OIC) in Istanbul saying “Ankara will send its forces to the Syrian town of Manbij if the United States does not remove the Kurdish People’s Protection Units (YPG) militia from the area.”

“History repeats … first as tragedy, then as farce”

Marx, in his essay The Eighteenth Brumaire of Louis Napoleon, made the famous statement: “Hegel remarks somewhere that all great world-historic facts and personages appear, so to speak, twice. He forgot to add: the first time as tragedy, the second time as farce.” Not knowing the convulsions that would shake the Turkish people over the last 50 years he was unaware apparently that after farce – comes more tragedy…

…So once again it seems – we are days, hours and minutes until the Turkish fighter jets begin to rain fire and metal on a peaceful people. While the rest of the world, once again, will bury its head in the sand or utter polite pronouncement for the dictator and his generals and militia commanders to respect human rights, the Geneva Convention and all the other junk and garbage from a world long past its sell-by date that is visibly falling part in front of our eyes – without, at present, a visible alternative –  as we watch the lunatics take over the asylum.

Members of New York City’s Turkish community gathered in Zuccotti Park near Wall Street on June 15 to protest the Turkish government’s bloody crackdown on peaceful protesters in Taksin Square that day. What began as an effort to preserve a small park in Istanbul has become a national campaign against Turkey’s increasingly authoritarian Islamic government, with Turkish activists staging daily demonstrations in front of the Turkish consulate. Greek anti-austerity activists joined the Saturday action, declaring that the Greek and Turkish people were united in the struggle for democracy.

From Chiapas to Rojava: seas divide us, autonomy binds us

Report from Rojava: Revolution at a Crossroads

Margaret Owen (Gender and justice in an emerging nation: My impressions of Rojava, Syrian Kurdistan, February 2014)

David Graeber (Why is the world ignoring the revolutionary Kurds in Syria? October, 2014)

“Tragically, the press of Turkey’s NATO allies is silent, at best, not only on the conflict but on the criminalization of Kurdish political activity. The silence, in my view, must be broken, and the remarkable Kurdish achievement made known to the world.”