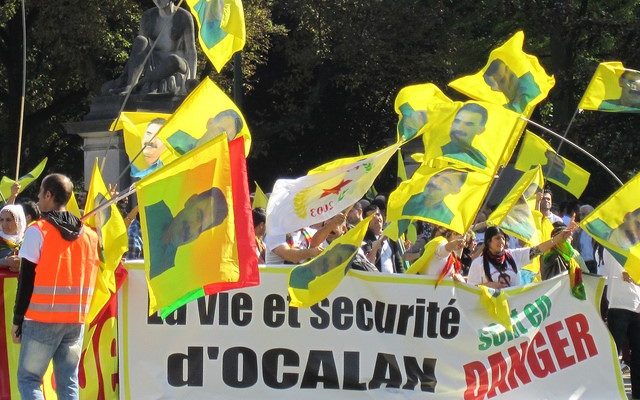 Solidarity with the Kurdish struggle… without Öcalan?

The Kurdish movement is being attacked on all political, societal, military, and ideological levels. In the circles that we move in, people are conscious of the state repression against the movement in Europe

With the recent increased visibility of the Kurdish freedom movement, countless panels, talks and demonstrations about the Kurdish movement have been organized in the past years. Many lectures and demonstrations have presented the concept of Democratic Confederalism with all its experiences and practical examples to difference audiences. These include for instance the self-governance structures of Bakur (northern Kurdistan/southeast Turkey), which have been implemented by the population since 2005 and which have been systematically and continuously destroyed by the Turkish regime through repression and imprisonment of civil society, activists, mayors, students and elected politicians. The same applies to the achievements of the Mexmûr Camp in southern Kurdistan (northern Iraq), a refugee camp that has been running itself autonomously for more than 20 years and which few people are aware of, or the women’s revolution in Rojava and the Federation of Northern and Eastern Syria, which is constantly under ideological attacks from all sides, while facing military assaults by the occupier army of the Turkish state. Furthermore, many debates have been held about the attitudes of NATO members and their hypocritical policies towards the communities and towards the implementation of international law in the Middle East region, as if to say: “As long as the Euro-centric rights of our citizens are not harmed, we don’t see a reason for upholding human rights on a global scale.” Similarly, people became more aware of the criminalization and repression in Europe that affect all those, who stand in solidarity with the Kurdish freedom movement.

In other words, most of us are familiar with the spaces in which such accomplishments and positive examples for alternatives are being discussed. We all know people, who identify with these ideas. And yet, the most important person as the visionary of these implementations, Abdullah Öcalan, is often being bypassed.

An attack on all levels

The Kurdish movement is being attacked on all political, societal, military, and ideological levels. In the circles that we move in, people are conscious of the state repression against the movement in Europe. The radical left, autonomous groups, and all other self-defining groups stand shoulder to shoulder with the Kurdish movement, whenever the images and flags of the YPG/YPJ, the PYD or of revolutionary comrade Sara (Sakine Cansiz) get banned. Confronting the repression in a communal manner constitutes a strong stance.

But what about the attitudes that are often expressed as soon as the representative of the Kurdish movement, Abdullah Öcalan, is being referred to during talks and similar events? Or the tendency to chant other slogans, as soon as Kurdish women begin chanting the banned slogan “Bijî Serok Apo” – Long live leader Apo – [nickname for Abdullah Öcalan] during demonstrations? What about the insecure looks and the silence in one’s own ranks? Why are efforts being made to fight against the ban on these flags, but nothing is done for Öcalan? Aren’t these related aspects? Where and why do we draw the line?

Activists of the Kurdish women’s movement are often confronted with criticism, for instance, when referencing Abdullah Öcalan in their talks, when waving his flags during 8th March International Women’s Day demonstrations or when displaying his images in their centers and at events. It is impossible to escape the question “Women’s liberation, nice and good, but how critically do you view leadership cult or the fact that you glorify a man from a feminist perspective?!”

These sorts of expressions expose common Euro-centric feminist perspectives and thinking vis-à-vis the Kurdish women’s movement. Crucially, such white, Euro-centric assertions deny the agency of Kurdish women and the Kurdish women’s movement that have been struggling against backward, sexist, and patriarchal structures for decades, not least, for instance, by accusing them of ignorance about the “leadership cult” around the dominant man. Apparently, the “other”, i.e. non-white women, especially coming from the Middle East, have an inherent tendency to surrender themselves to male domination!

Reference to one’s own historical context and perspective is often used by people as a standard for all other struggles. Thus, Nazi history and fascist leadership cult are applied uncritically as a measure to assess Abdullah Öcalan. Nobody says it openly – people carefully express their concerns about “leadership cult”, of which they indirectly accuse the Kurds at the end of the day.

The state’s targeting of the Kurdish movement, such as exemplified by the banning of Abdullah Öcalan’s pictures or certain slogans, is not an attempt to actually protect society from leadership cults. Rather, his personage and ideas are seen as a threat and a potential alternative to the state’s own system of domination. We can say that the German state has understood and analyzed Öcalan more comprehensively than some groups and individuals. This is expressed in the weight of the state’s policy of repression and criminalization.

While some people are uncertain about whether or not to even mention or openly reference Abdullah Öcalan, they start fragmenting his integrity as the initiator of Democratic Confederalism and as a representative of the Kurdish society and movement in all parts of Kurdistan and the diaspora. In the course of this process, they take advantage of their privileges to lecture me, as an individual, on what or who is worthy of supporting. Thus, one is to mention Rojava without Öcalan or to understand the Kurdish women’s movement without the meaning and importance of Öcalan.

No clue about the gender question?

At the same time, the Kurdish women’s movement’s understanding of the gender question gets denied in this light. Apparently, this is illustrated in the everyday lives of Kurdish women, who see Öcalan, a cis-man, as the pioneering thinker of the women’s movement and of jineolojî, the science of women and life! How paradoxical! How dare they call themselves a gender-egalitarian, ecological, democratic and liberationist movement!?

The real paradox of the situation lies in the fact that rather than an engagement with the ideas and concepts of the women’s liberation ideology, the Kurdish women’s liberation movement is reduced to a person’s male gender. Abdullah Öcalan’s primary treatment as a person of the male sex leads to a limited and short-sighted view of reality – and simultaneously shows the dogmatic attitude of people’s attempts to constantly take masculinity as a reference point and to take on rejectionist stances. The mentality of the dominant and toxic-hegemonic masculinity is attributed to a gender rather than being understood as socially-constructed mentalities and attitudes. Instead of fixating on his gender, critical voices ought to actually engage with the defense writings and ideas of Öcalan, which make him what he is to the Kurdish women’s movement!

As long as patronizing and denialist attitudes towards other women are not overcome and destroyed, no meaningful women’s solidarity can develop. In order to understand the Kurdish women’s movement, one must engage genuinely with the following questions: Why does Abdullah Öcalan play such an important role for the Kurdish movement?  Why does one of the most progressive women’s movements in the world reference Abdullah Öcalan in such a strong manner? The answer cannot simply be that all Kurdish women are regressive! But this is exactly the feeling that the many different unfavorable attitudes, which manifest themselves in racist, sexist or Euro-centric behaviors or mindsets, produce.

The current threats of the Turkish state to launch a military attack on the self-governance structures of Rojava and the Federation of Northern and Eastern Syria, of Camp Mexmûr and of Şengal must all be seen as direct attacks on the representative Abdullah Öcalan. That is why our line of sight and our actions should not only be directed at Kurdistan but must also see the prison island of Imrali as a crime scene.

In terms of solidarity, the Kurdish women’s movement needs a common praxis, which views Abdullah Öcalan as an indispensable and inseparable thinker of Kurdish society. That is exactly why the HDP representative and member of parliament Leyla Güven and dozens of other women in Turkish prisons have entered a hunger strike. Their action is a strong stance against the total isolation and prison conditions of Abdullah Öcalan. Likewise, since December 17th, 15 activists in Europe have entered an indefinite hunger strike.

In their struggle and in their defense of Abdullah Öcalan, these women are in need of a strong, uncompromising women’s solidarity!