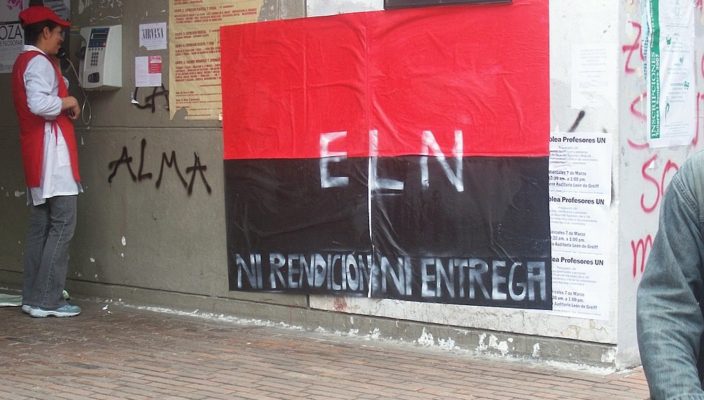 Guerilla bombing provocation is a gift for Colombia’s repressive government

On Thursday, January 17, a car bomb exploded near the Santander Police Academy in Bogotá leaving twenty cadets dead and dozens of wounded civilians

On Thursday, January 17, a car bomb exploded near the Santander Police Academy in Bogotá leaving twenty cadets dead and dozens of wounded civilians.

At first, the identities of the people responsible for this terrible event were a mystery, with independent media outlets suspecting a self-inflicted attack by government officials to justify breaking peace talks with the ELN (National Liberation Army) guerrilla group, now the oldest active rebel group in Colombia after the FARC rebels put down their weapons as part of the 2016 peace treaty signed with the government of Juan Manuel Santos.

As absurd as the self-inflicted attack theory may sound, such events were actually quite common in Colombia during the two presidential terms of Álvaro Uribe (2002-10), whose violent and authoritarian government caused thousands of innocent deaths after civilians killed by state militia agents were literally disguised and passed off as dead guerrillas.

Despite these human tragedies and a number of policies that cut down workers’ rights and worsened the country’s already battered public education system, Uribe’s governments were popular among the voters of Colombia (which account for less than 44 percent of the country’s population) due to its uncompromising attitude towards any groups—legal or not—that were outspoken opponents of the government.

As paradoxical as this may sound, Uribe’s success lay in the fact that, according to many polls, a good number of Colombians felt the country was safer, even though it was really not amidst the more than 3,830 dead civilians the former president’s government was responsible for, according to the country’s own district attorney’s figures.

Fast forward to 2018 and Uribe’s popularity proved yet again to be substantial when his protégé, Ivan Duque, a little known young senator from Uribe’s party, was elected president after beating progressive candidate Gustavo Petro.

Unsurprisingly, the success behind Duque’s rhetoric lay in his violent rhetoric condemning the Peace Treaty that was signed with the FARC, an event labeled by both Duque and Uribe as “criminal” because it gave political rights to the former guerrilla group.

Both Duque and Uribe also appealed to the voting masses using the time-honored scare tactic of warning Colombians that voting for a progressive, left-wing candidate such as Petro would immediately turn the country into “another Venezuela,” a threat that is becoming all-too-familiar among right-wing governments who have nothing but fear to get voters on their side.

The fact remains that, without the old military threat of the FARC, Duque and Uribe’s authoritarian administrations were left without a smokescreen to hide the corruption scandals that have plagued their governments since day one, scandals that include documented bribes from Brazil’s Odebrecht $50 million payout scheme to secure highly profitable construction contracts all around South America.

Add to that Duque’s indifference towards the escalating number of deaths of social and community leaders around Colombia, his recent proposals of raising taxes for food in a poor country (which were partly repealed amidst protests), increasing the obligatory age limit for Colombians to acquire pensions, and giving magnates generous tax cuts and millionaire subsidies. All that remained of his government last week was a sincere portrait, clear as crystal, of both his and Uribe’s true ambitions: to drain the pockets of the Colombian working and middle classes and hand the dividends to the country’s richest one percent.

The outcome of these policies—which are nothing but legal theft—was public outcry in Duque’s first months as president of Colombia, an outcry that was beginning to turn the tide, finally, against Uribe’s enduring popularity. Mass media outlets (owned by private economic groups close to Uribe) were even protesting against the ridiculous nature of the government’s economic and social stances in a country that ranks very high on income inequality indices and overall poverty.

Hope, indeed, seemed to be on the horizon when even the country’s district attorney, Néstor Humberto Martínez, was discovered (with audio-tape evidence) to be aiding and abetting the multi-million dollar bribes that Odebrecht distributed among Colombia’s ruling conservative oligarchy, a scandal that pushed him to the brink of forced resignation after massive protests mobilized against him.

But, then, of course, the car bomb exploded in Bogotá last Thursday, and all of these scandals suddenly disappeared from Colombia’s main media outlets.

As it turned out, two days after this tragic event, the ELN guerrillas published an official announcement in which the group recognized its responsibility for the attack, emphasizing that the offensive was directed towards the state’s police and not civilians.

Additionally, the ELN shed light into their decision to bomb the police academy by revealing how Duque’s government violated a unilateral cease-fire agreement during the Christmas holidays, a violation that saw the state militias take hold of strategic posts in areas close to ELN camps and massive bombings that killed ELN rebels and affected peasant villages nearby.

Unsurprisingly, none of Colombia’s mass media outlets reported on these events as they happened, leaving the country’s population to believe that Duque and Uribe’s government was perhaps thinking of resuming peace talks with the ELN that started and advanced during Juan Manuel Santos’ government.

And yet, after knowing all these facts behind the ELN’s bomb offensive, one must conclude that the rebel guerrilla group made a terrible, and politically stupid mistake by yielding to the government’s provocations. They produced exactly what the government wanted: an evil, old-fashioned foe to convince Colombians that the country is no longer safe, and has never been safe after the Peace Treaty with the FARC.

The tragic results of this government-won strategy are now obvious: A new distraction has made the public forget about the state’s corruption scandals, its condoning of the murder of dozens of opposition and community leaders, and its imposition of economic policies designed to make the rich richer and the poor poorer.

Colombia is headed towards a very dark era in the next four years, an era that will see even more violence than the country’s citizens are, sadly, already used to living.

Indeed, after the ELN’s military offensive, the Colombian government has not only turned public opinion in its favor, but has started to create a favorable environment to make violent censorship against the state’s peaceful opponents acceptable again, not to mention a favorable environment to conceal the state’s complete disinterest (for lack of a stronger word) in improving the quality of life of Colombians through healthcare, public education, and sound environmental policies.

As former presidential candidate and now senator Gustavo Petro recently said, “Those who wanted war have now gotten it,” and it is safe to say that, as always, the real victims will be the average, hard-working Colombians who are still dreaming of a country with peace and equal opportunities for all.