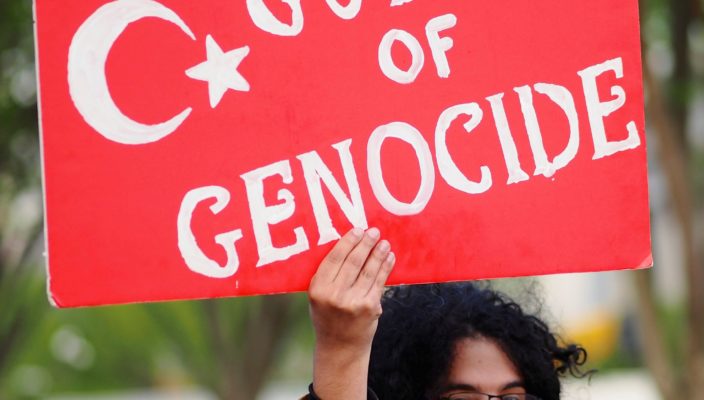 A Turkish prosecutor has prepared an indictment against Necla Demir, the publisher of the Turkish news site Gazete Karınca

PanARMENIAN.Net – A Turkish prosecutor has prepared an indictment against Necla Demir, the publisher of the Turkish news site Gazete Karınca, over three reports one of which attributed the motivation behind Turkey’s attacks on Afrin, Syria to “the 1915 mindset,” referring to the year of the Armenian Genocide, Ahval reports.

The prosecutor said the site was “making propaganda of an illegal organisation” during Turkey’s military operation in northern Syrian enclave of Afrin.

A court in Istanbul has accepted the indictment, which says Gazete Karınca has been “making continuous propaganda for a terrorist organisation,” the accused news site reported on Friday.

The charges against Demir and Gazete Karınca are principally based on the news site’s reports and interviews published in the period when the Turkish Armed Forces declared a cross-border operation in Afrin, a north-west Syrian enclave formerly controlled by Syrian Kurdish groups, on Jan. 20, 2018.

The indictment cited three news reports published on the news site titled as evidence of a crime. One of the news items reported that hospitals in Afrin had gone over capacity during the Turkish military operation, another dealt with the day attacks by Turkish forces reached the town centre. A third attributed the motivation behind the attacks to “the 1915 mindset,” referring to the year of the Armenian genocide, when Ottoman forces drove the empire’s Armenian minority out of the country, killing over a million in the process.

Turkish authorities have interrogated Demir, who has rejected all accusations.

Demir said the reports the news site released were within the scope of freedom of expression and press and the right to information.

The indictment claims Gazete Karınca’s reports were “one-sided and accused Turkish Armed Forces of the occupation of Afrin as well as torture and massacre of civilians.”

“In this manner, (Gazete Karınca) elaborated to report on behalf of the PKK/KCK (Kurdistan Workers’ Party and its political wing), and its Syrian offshoot the PYD/YPG (Democratic Union Party and its military wing),” the indictment said.

Turkey has stepped up a crackdown on dissent since the military entered Syria in January 2018, and has drawn widespread criticism from human rights groups and statements of concern from the European Union and the United States.

The country has a large Kurdish minority, many of whom see the operation in Afrin as an attack on the movement for Kurdish self-determination and democratic representation in the wider region, including southeastern Turkey. Hundreds of people who protested against the Afrin offensive were detained.