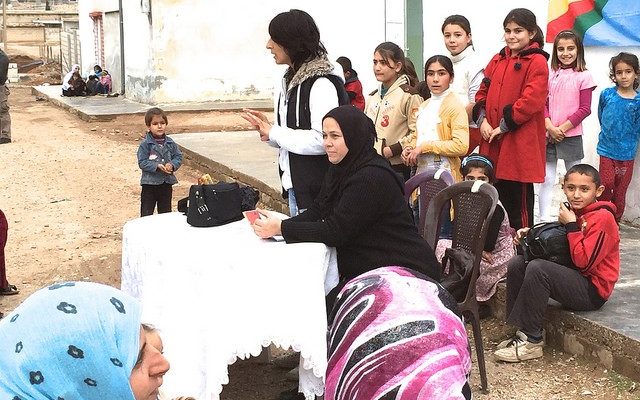 This text was translated from subtitles of a Youtube video in Arabic that has since been deleted, on 27 October

During the 20th century, the revolution of freedom in Kurdistan was continuing in different forms. This revolution continued until the beginnings of the 1970’s in a narrow and tribal way. After the 1970’s, a different revolution emerged and spread across the four parts of Kurdistan, as well as embracing all the constituents that live on its territories. This revolution that has continued for 40 years, and is led by the Kurdish Freedom Movement, is based on the philosophy of the Kurdish thinker Abdullah Öcalan. During this 40 years of struggle, this revolution crossed the hurdle of narrow nationalism and expanded across the regions of the Middle East. The Kurdish philosopher and thinker Abdullah Öcalan recognised this system as the democratic nation that today is being embodied by Rojava. On the 16th and 17th of March, all the representatives of the constituents, Kurdish, Arabic, Syriac, Chechen, Turkmen and Armenian, met in Rimelan in the region of Girkê Legê in Rojava. They came from the Rojava areas, Shahba, Manbij and Aleppo. There were also representatives of 31 political parties, institutions of civil society, youth organisations and feminist movements. After many discussions, the meeting was concluded with a proposal for a project of a united democratic system in Rojava – Northern Syria that consisted of 10 articles. After they agreed on the system, four committees were formed to introduce the system and explain it to the constituents of Rojava, and to create The Charter of Social Contract within six months.

1 – The free citizen and the life of democratic communes.

Every citizen should surpass their individualism and egotism and become a member of the commune. We should know that a person who is not in the commune will not have a personality in society. The membership of the commune shows its democratic side. Every commune is both the ethical and political cell at the same time. A member of a commune can be defined as a free individual in the democratic nation.

2 – The political life and democratic autonomy.

3- The democratic nation and social life.

It is not possible to make up for the society with anything in human life. Going away from society means going away from humanity. The democratic nation stresses the value of community above all else, and it stresses the continuance of a society that is being destroyed by modernisation.

4 – Freedom of life in the democratic nation.

Women play an important role in the period of transformation into a nation. The free woman means a free society, which means democratic nation. It can be accomplished by creating ideological and organisational forces, political management, in an ideological and political way. And here is where the spirit and mentality should be strengthened before multiplying physiologically. This truth determines the nature of social cohesion.

5 – The democratic nation and economic autonomy.

The democratic nation criticises the three main components of capitalist modernity, stealing the net profit, the tyranny of the nation state, the destruction that is caused by industrialism through technology. The work is on ecological industry and communal economy and it is also to restore social control to economic again. Economic autonomy is the most inferior reconciliation that will happen between the nation state and democratic nation. Democracy becomes clearer in the foundations that the economic autonomy will be built on. Therefore, the industrialism, development, technology, companies and private property are within the framework of ecological and democratic society.

6 – The legal structure of the democratic nation.

The legal system depends on diversity and has a simple form. The democratic nation depends on solving a big percentage of its cases by ethical and political procedures. Women play a significant role in the period of transformation to a nation.

7 – The culture of the democratic nation.

Culture according to the idea of the democratic nation is a group of associations, meanings and structures formed by human societies over the ages.

8 – The system of defence in the democratic nation.

Every living organism has a system of defence. The idea of developing the system of defence in the democratic nation lies in protection of the nation and the people, and it recognises the right of the groups to defend themselves.

9 – The diplomacy of the democratic nation.

These points that we discussed explain this philosophy theoretically and here is the question the faces us, how are these points going to be applied practically in the democratic and federal system of Rojava – Northern Syria? And what will the mechanism be? The constituent assembly of the democratic federal system in Rojava – Northern Syria uncovered the Charter of the Social Contract that is constituted of 85 articles to the general public. It appears that these articles match the principles of the philosophy of the democratic nation.

During these 5 years of the Rojava revolution with the establishment of the democratic self management, the ground has been laid for confederalism.

Co-operation in Mesopotamia is a project of the Solidarity Economy Association….a multi-stakeholder co-operative, and we see ourselves as part of the international solidarity economy movement, as well as the co-operative movement in the UK, where we are based.

We have re-named the project Co-operation in Mesopotamia, in line with the growing pluralism of the Kurdish freedom movement, which we express our solidarity with. Mesopotamia is a term often used within this movement to refer to the historic land, before the creation of nation states and the borders which now divide it.

The Charter of the Social Contract