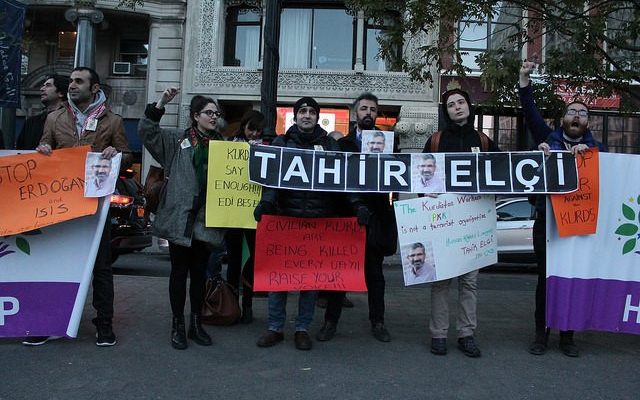 Tahir Elçi, the Kurdish human rights lawyer, was shot dead in Diyarbakır, in Turkey’s Kurdish southeast (Northern Kurdistan), on November 28, 2015, while holding a press conference calling for peace in the region

Tahir Elçi, the Kurdish human rights lawyer, was shot dead in Diyarbakır, in Turkey’s Kurdish southeast (Northern Kurdistan), on November 28, 2015, while holding a press conference calling for peace in the region.

As the videos linked below clearly show (from CC TV footage), a shooting had occurred earlier nearby on Gazi Avenue resulting in the altercation at the Four-legged Minaret of the 16th century Sheik Matar Mosque monument where Elçi was speaking. The lawyer was then killed by a single bullet to the back of his head.

Promises to find the killers of the peace campaigner were issued by the Turkish Prime Minister days after his assassination. Shortly afterwards, and despite evidence of no serious police investigation, Ahmet Davutoğlu, then Turkish PM, announced that the PKK (Kurdistan Workers’ Party) was responsible for Elçi’s death.

Cynicism at its most cynical – from the Turkish regime.

The opposition said it was a planned execution, and that he was targeted after being accused of supporting the PKK following a television appearance, after which he had received numerous death threats.

“The threats followed a controversial appearance on a CNN-Turk talk show, in which Elçi claimed that the PKK – which for decades has engaged in violence against the Turkish security forces, and has been responsible for the deaths of many civilians – should not be considered a terrorist organisation… Elçi argued that a peaceful resolution of the conflict would require a recognition that the PKK, despite its documented history of violence, is primarily a political entity, with political demands, and with significant support among the country’s civilian population.” (Forensic Architecture)

As a result of the lack of an adequate police investigation, the Diyarbakır Bar Association, of which Elçi was chairperson at the time, asked Forensic Architecture,  a research agency based in the University of London, to examine the evidence and independently investigate the circumstances of the lawyer’s death.

Despite Forensic Architecture’s hesitation to place the death directly in the hands of one of the 3 policemen clearly seen firing in Elçi’s direction the Report states:

“It is quite possible that the killing was an unintentional consequence of the firefight… However, the way it unfolded, and Elçi’s place within the long history of conflict in that region, make it inevitable that questions and suspicions will always surround the incident.”

The Diyarbakır Bar Association went a step further saying that in the light of the Forensic Architecture report, one of the three police officers at the crime scene was responsible for the killing and prosecutors should now question these officers as suspects.

In its introduction to the report, Forensic Architecture says:

“Forensic Architecture was commissioned by the Diyarbakır Bar Association to investigate the killing of Tahir Elçi during a press conference he delivered on the 28th of November 2015…Elçi was calling for an end to the conflict, which had erupted in the city four months ago.  The incident was preceded by another shooting, which occurred moments earlier on the adjacent Gazi Avenue. Two members of PKK’s youth wing (known as the YDG-H) shot two police officers,  who later died. The two PKK members then fled down Yenikapı Street, where Elçi’s press conference was taking place. As the press conference was being filmed, the scene unfolded in front of multiple cameras. Plain-clothes police officers at the press conference opened fire at the PKK members as they ran through the scene. The only fatality from this shooting was Elçi, who was shot in the back of the head.”

Benefit of the doubt, you might wonder? Unfortunately, as the usually conservative Financial Times pointed out, in responding to Tahir Elçis death you need to remember Turkey’s troubling record, over the course of too many years, of unsolved murders, many of them emanating from within a political apparatus that has most obviously had its difficulties in coping with legitimate opposition, which should be a norm in democratic institutions.

Not so in Turkey, it seems?

“For decades, Turkish society has been scarred by unsolved murders. Shadowy killings, many never fully probed, have fuelled theories about the role of criminals, politicians and the security services in the demise of state opponents, activists and journalists.” (Financial Times)

Thus by the end of 2015, it appeared that the case of the Kurdish human rights lawyer shot dead in Diyarbakir was also destined to remain unresolved. No longer? There is hope now that there will be justice served for the loss of the lawyer.

“We hope this report will create public pressure on the prosecutor to finish the investigation and ensure Tahir Elçi’s death does not remain among the files of unsolved murders,” said Gamze Yalcin, a member of the Diyarbakir Bar Association commission working on the case. (Financial Times)

For its report, Investigation of the audio-visual material included in the case file of the killing of Tahir Elçi on 28 November 2015, Forensic Architecture analysed existing video, witness testimonies, forensic reports and architectural maps and reconstructed the last moments of Tahir Elçi’s life. “By analysing the sounds and trajectories of 40 gunshots, Forensic Architecture was able to rule out the chance that the PKK youths killed Mr Elçi and the possibility of a long-range weapon. Their report concludes that only two of the five policemen at the scene could have fired the fatal shot. It also criticises police for failing to administer first aid to the lawyer as he lay bleeding and for the ineffective investigation that followed.” (Financial Times)

Eyal Weizman, founder and director of Forensic Architecture: “The best remedy against further escalation is understanding the truth…Now the ball is with the Turkish authorities. We hope they will pick it up.”

Considering the respect currently being shown for the rule of law in this Turkey of President Recep Tayyip Erdoğan, one cannot be blamed for doubting that this will be the path taken by the regime as they prepare for the upcoming local elections in March.

Following the release of the report Tahir Elcis wife, Türkan, called on the Turkish authorities to investigate the murder suspects clearly identified in the report:

“‘Let’s say, we were wrong about a lack of justice and the rule of law in Turkey. A probe must be launched based on the report that has a judicial value,  and the judiciary should surprise us,’ Türkan Elçi said on Twitter, adding that demanding justice is an incontestable right.”

Prepare to be surprised?..

…If not now, then when the time comes for justice, human rights and a meaningful democracy to take their place in a Turkey where all its people…

with the wide-eyed joy of children

anything modern beautiful and good –

…have finally benefitted from the strength and courage of citizens like Tahir Elçi, his family and so many others currently being targeted in Turkey by this increasingly repressive and autocratic regime…

NEW YORK, November 29 – Kurdish-American organizations and supporters rallied in Union Square to protest the killing of Tahir Elçi, a prominent human rights attorney and chairman of the Diyarbakır Bar Association, in Turkey’s Sur district on Saturday, as well as ongoing attacks on Kurdish communities in Iraq and Syria by ISIS militants.

* By Joe Catron Some Rights Reserved

In November 2015, during a press conference in Diyarbakir (southeastern Turkey), Tahir Elçi was the embodiment of the Kurdish people’s fight for human rights and justice. The Turkish government at the time accused the PKK rebels of being behind this murder. An investigation by Forensic Architecture shows that he was actually killed by the police.