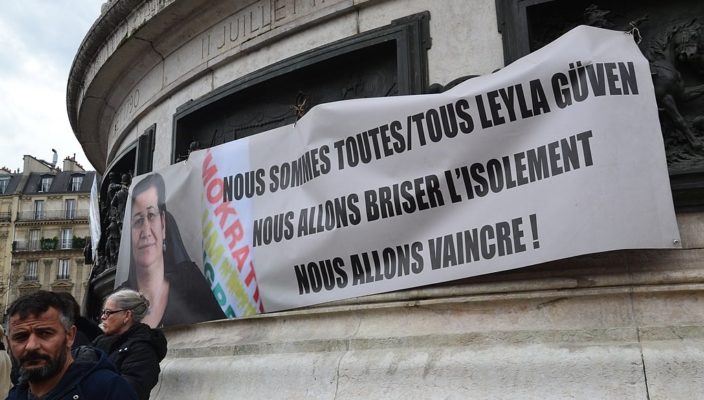 Kurdish MP Leyla Güven has now been on hunger strike for more than 120 days. Her body has begun to shut down; she can hardly speak.

Alongside over 300 other hunger strikers, Leyla is standing in solidarity with the imprisoned Kurdish leader Abdullah Öcalan – they’re calling for his isolation and solitary confinement at the hands of the oppressive Turkish government to end.

And they may pay for this brave stand with their lives.

Having been part of a recent international delegation to Turkey and Kurdistan which included Manuel Cortes of the TSSA, Paul Scholey of Morrish Solicitors and actress and playwright Maxine Peake I can say I never seen anything like this before.

When we met Layla she was racked with pain. We had to visit her home wearing masks because her condition is so acute that even the smallest infection could end her life. She is a very brave woman and is determined to see this through. It was harrowing meeting her.

For 20 years, Öcalan, the leader of the Kurdish Workers’ Party (PKK), has been held in a cell on the island of İmralı, where he has been allowed only one visit, from his brother, since 2016. He has not met with his lawyers in nearly a decade. He is not allowed any contact with the outside world.

The conditions under which Öcalan is kept violates the European Convention of Human Rights, which Turkey must abide by as a member of the Council of Europe; it violates even Turkey’s own constitution and laws. At its heart, Öcalan’s imprisonment is a human rights issue.

The parallels between Abdullah Öcalan and Nelson Mandela are uncanny.

Ocalan is the ‘Mandela of the Middle East’. Like Mandela, Öcalan is being detained indefinitely under horrific conditions on an island – literally and symbolically amplifying his absolute isolation.

And also like Mandela, Öcalan is being persecuted for beliefs that we as trade unionists and social democrats hold most dear – equality, justice and peace.

Not surprisingly we were not allowed to visit Öcalan and a request to Turkey’s justice minister to express concern over the rapidly deteriorating condition of the hunger strikers fell on deaf ears.

Besides meeting Layla Güven, we met many trade unionists, campaigners, lawyers and others who have all told us the same story – of the worsening human rights situation in Turkey and the violent persecution of anyone who dares stand up to the government, including trade unionists.

There is a vicious clampdown on trade unions under the oppressive Erdoğan-led Turkish government.

Most recently, the president of the rubber and chemical workers union Abdullah Karacan was assassinated last November.

There have been arrests of trade unionists as they attempt to strike over health and safety issues at the construction site of the new Istanbul airport and the arrest of Renault shop stewards.

The denial of union recognition by multinationals are common. Those who dare to join an independent trade union, or whose family are members of independent unions, are blacklisted from getting government jobs.

This is in part why Unite and other UK trade unions have formed the Freedom for Öcalan campaign – his continued confinement runs in parallel with restrictions on labour rights and freedoms.

Ocalan is also the only person who can secure peace in the Kurdish-Turkish conflict, which has raged on for decades.

Under his leadership and through his writings and ideas, an enclave of grassroots democracy has been established in Rojava in Northern Syria – where women’s and LGBTQ rights, environmentalism, and religious and political tolerance flourish.

It’s a beacon of democratic light in a region mired in violence, fascism and religious extremism.

The case for Öcalan’s freedom is clear, and the Freedom for Öcalan campaign, of which Unite is a founding member, is determined to secure it.

Following the delegation we are now putting together a publication that we can distribute setting out our findings.

Our aim now is to get more union members involved and to continue to push the case in Turkey and in the international community to end Öcalan’s isolation first of all, and to grant him access to his lawyers to work towards his eventual release.

Maxine Peake, at a recent press conference on the situation in Turkey who called for Öcalan’s freedom said:

“I want Öcalan to know people are there, that no one has forgotten him and that strides are being made throughout the global community to get him free.”

“I hope we can spread the message because this is an issue which is being ignored on a European and global level. People have no knowledge that over there a Member of Parliament (Leyla Güven) can be on hunger strike.”

Time, however – for both Leyla and the hundreds of hunger strikers now in critical condition, as well as for Öcalan himself, who this year spent his 70th birthday in his cell – may be running out. The situation has now reached crisis level and the stakes could not be higher.

Find out more about the Freedom for Öcalan campaign and how you can support it here.

* By Tony Burke, Assistant General Secretary at Unite the Union