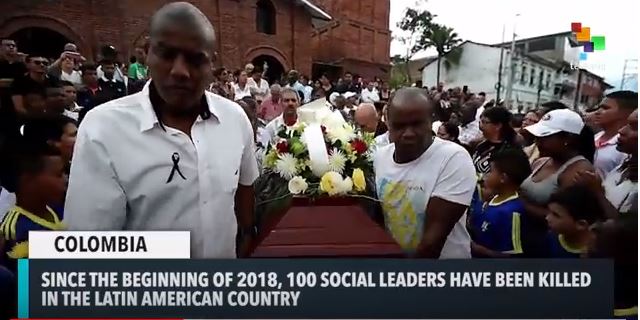 Angela Davis has denounced the recent assassination attempt on environmental activist Francia Marquez in Cauca, Colombia, and the high levels of violence against African-Colombian social leaders

Angela Davis has denounced the recent assassination attempt on environmental activist Francia Marquez in Cauca, Colombia, and the high levels of violence against African-Colombian social leaders.

Here is the full statement.

Statement on Attack of Afro-Colombian Leaders

Black social movements are being systematically targeted in Colombia in the aftermath of the 2016 Peace Accords. I have been informed that on May 4, four gunmen stormed into a building in Santander de Quilichao, in the Northern Cauca region of Colombia, opened fire, and tossed a grenade into a crowd of Afro-Colombian activists and two children. The gathering included leaders from several grassroots Afro-Colombian organizations, and they planned to discuss an upcoming meeting with the Colombian government. The attack occurred in a region of Colombia that I had the opportunity to visit in 2010. Among those targeted yesterday was activist Francia Marquez, winner of the 2018 Goldman Prize, and someone with whom I have worked in solidarity for nearly a decade. Brazen acts of targeted violence against Afro-Colombian activists like these call into question the implementation and legitimacy of Colombia’s 2016 Peace Accord. Francia is not alone. She works with collectives of committed people that face repression and outright violence as a consequence of their struggle to defend their territory, protect the environment, and combat racism. In yesterday’s attack, a number of prominent black activists were present–Carlos Rosero, Clemencia Carabali, Yellen Ararat, Victor Hugo Moreno, and Sofia Garzón. Their work is crucial for building a world of justice and peace. And they were instrumental in guaranteeing the inclusion of an Ethnic Chapter that safeguards minorities’ rights and their collective territories in the final Peace Accord.

I express my outrage and deep concern that this could happen, especially when we consider that the gunmen had to make it through at least two government checkpoints in order to reach this meeting. The right to life is the fundamental basis of all other human rights, and it is being systematically violated in Colombia even in the aftermath of the Peace Accord. These armed actors feel emboldened to continue to target Afro-Colombian leaders because they know there is impunity for such actions.

I urge the Colombian government to investigate this attack, and work closely with the leaders and communities affected by this attack, to ensure the protection of Afro-Colombian leaders, and human rights defenders more generally. I also urge the Colombian government to guarantee the full implementation of the Peace Accord, including its commitments to Afro-Colombian communities. During my time in Northern Cauca with Francia, I witnessed how inaction by the government directly contributed to the displacement and dispossession of black communities. Implementing the Peace Accord will bring the government one step closer to upholding the fundamental and constitutionally- protected rights of black communities. This means, among other things, meeting with Afro- Colombian leaders, complying with agreements made with communities, and guaranteeing these communities’ rights to ancestral territories.

As long as Afro-Colombian leaders are being threatened, attacked, assassinated and imprisoned, there is no peace in Colombia. The international community is watching closely and we will continue to work in solidarity with leaders in these communities.