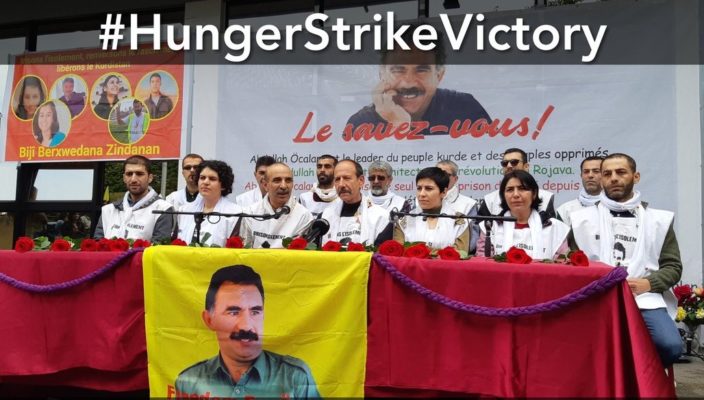 From Kurdistan to Great Britain – Why hunger strikes matter

It is only with our knowledge and understanding of our own history that we can see the impact hunger strikes can have in the fight against oppression and tyranny. Our own history of struggle has been shaped and redefined by these acts. That’s why hunger strikes matter, from Kurdistan to Great Britain

In the last days thousands of Kurds and their supporters all over the world have ended a six month long struggle against the fascist state of Turkey using the political strategy of the hunger strike. Since autumn of last year the HDP MP Leyla Guven along with other comrades from Turkey, Kurdistan, Wales, Germany and other nations have been on indefinite hunger strike in order to end the Isolation of Abdullah Öcalan, the revolutionary and ideological representative of the Kurdish struggle for freedom. Thirty of these comrades took a death fast and eight comrades self sacrificed themselves in order to achieve this revolutionary goal. Now that Öcalan has been in contact with his lawyers and with his own blessing called an end to the hunger strikes, the comrades are now ending their long struggle.

While support for the hunger strikes was strong within many communities around the world, the outreach of the strike both in the British mainstream media and the radical left wing communities was not quite as loud as it could have been. The exception being Wales where the support and resistance built with the hunger striker Imam Sis led the Welsh Assembly to denounce the actions of the dictator Erdogan and make Wales one of the first nation to show their support for the Kurdish cause.

Hunger Strikes in British society is always a subject of much controversy; many people see the act as a fanatical approach to resolving political objectives, while many people hold the importance of life to such an extent that they see the act hunger strike as nothing more than a suicidal approach to resistance. Many also see hunger strikes as a strange phenomenon that shares no link to our own society or the history of our people. But this could not be further from the truth.

To understand this we need to look back at our own history. Since the days of the British Empire to the political turbulence of the Thatcher years, hunger strikes have played a major role in our history. Hunger strikes have helped shift the political discourse of our society. This is impossible to deny. Looking back at our history, many major movements from women’s suffrage to the liberation of India and Ireland from British Colonialism. In each of these struggles there were hunger strikes.

With the women’s suffrage movement, and the struggles to achieve the objective of suffrage on the same level as men, the WSPU, known as the suffragettes engaged in actions against the state using methods of direct action these included the breaking of windows, arson, and assaulting police officers without doing harm. These actions eventually earned the wrath of the patriarchal British state and many WSPU members were jailed for these actions. In response to the brutal punishment and harsh treatment by the government on the suffragettes, imprisoned WSPU members engaged in a campaign of hunger strikes. The effect of this meant that some of the women were freed upon taking this action, and this led to the situation where the policy of imprisonment of suffragettes became futile. In order to challenge these actions taken the authorities then began to implement a policy of force feeding hunger-strikers using tubes. This act of torture that was used on a repetitive process and caused sickness among the hunger strikers would backfire on the British government as this further highlighted to society the oppression women were facing within the prison system.

With the reality of growing public dissent over the tactic of force feeding, and the determination of the jailed suffragettes to continue their hunger strikes, the British government which was led by the Liberal party introduced a new policy known as the ‘cat and mouse’ Act through Parliament. The idea behind this Act was to allow the release of prisoners but with the condition for them to be jailed again once they had recovered from the effects of their hunger strike. The Government hoped that with this Act, they would be able to limit the effects of the hunger strikes and reclaim lost support for the Liberal party among male voters who by this time had criticized the act of the force feeding of women prisoners. This completely backfired and the support for the Liberal party reduced even more.

During the time of British Colonial Rule in India there were also hunger strikes against the tyranny and oppression of the British Empire. Many in history are already aware of Gandhi and the hunger strike actions he took but there were also others, one example was Bhagat Singh. Singh was an Indian national who was an active participant in the Indian independence movement. He was an enthusiastic and determined revolutionary. Unlike Gandhi who leaned towards pacifism, Singh was more committed to the ideas of socialism and believed that only through revolutionary war could India be freed from British colonial rule.

When he was arrested on charges of murdering British police inspector Saunders and Chanan Singh, Bhagat Singh was taken to prison in Punjab. Whilst there, along with other prisoners he began a hunger strike. His hunger strike was taken in order to raise a voice against the unsanitary and unhealthy conditions of the jail. The clothes, rooms, and all basic necessities provided by the authorities were dirty and unfit for purpose. Besides this they were also coerced to do excessive manual labor which was intolerable and torturous not only for Singh but also for many other prisoners.

Bhagat started his hunger strike in June 1929 and he was successful enough to gain public sympathy and support. Jawaharlal Nehru, who would later become the first prime minister of India visited Singh in prison and was deeply affected when he saw how much pain he was in. Like with the suffragettes before, the British government planned to use counter insurgent tactics on the strike. One example was to place a well in front of Singh and the other hunger strikers in order to break their spirit, but their tactic served to no use and none of them ate food. Even after a court case where he was forced to attend in spite of his poor health and a transfer to another prison, Singh still carried on with his hunger strike. By this time he had lost 14 pounds. This further fueled popularity that crossed beyond the boundaries of Punjab. Only after the insistence of his own father did Singh decide to call an end to his struggle and in October 1929 after 116 days his hunger strike ended.

Fast forward to the 1980s, with the ongoing war between the Provisional IRA and the British State over the struggle for Irish Reunification, many Irish republican militants were arrested and interred in the Maze prison by the authorities. Whilst in prison the Irish republican prisoners began a series of protests over a five-year period. The protests began as the blanket protest in 1976, when the British government withdrew Special Category Status for convicted paramilitary prisoners. This led to two separate hunger strikes organized by prisoners who were members of the Provisional IRA and the Irish National Liberation Army (INLA). The first hunger strike took place in 1980, when seven prisoners participated in the action, however the strike ended when the British government decided to make an offer in order for the prisoners to concede their demands. This however was not to last when the Government then did a u-turn on the details of the agreement.

This decision by the government led to a second hunger strike, which began in 1981 and was led by Bobby Sands. This hunger strike ultimately became an intensive conflict between the Irish Republican prisoners and the British Prime Minister of that time, Margaret Thatcher. This hunger strike led to increased support for the Irish Republican cause and Bobby Sands, one of the most historically well known hunger strikers, was elected as a member of parliament during the strike. This began to attract media interest from around the world. However Thatcher still would not budge and refused to meet the demands of the prisoners. In the end the strike was called off after ten of the prisoners had died as a result of the hunger strike.

Bobby Sand’s hunger strike was the longest, lasting for 66 days until he died. His funeral was attended by 100,000 people. And while Margaret Thatcher’s reactionary resolve may have been seen as a success by those on the right and in loyalist communities, the strike had reached a point and critical moment where it had radicalized Irish nationalist politics. After the deaths of the prisoners and public disorder on the streets of Northern Ireland, the government in the end were forced to grant partial concessions to the demands of the prisoners. It was the driving force that gave a huge propaganda victory to a previously demoralized Provisional IRA and gave Sinn Féin precisely what it needed to become a mainstream political party. Even today the legacy of Bobby Sands is respected not only in Ireland but all over the world.

It is only with our knowledge and understanding of our own history that we can see the impact hunger strikes can have in the fight against oppression and tyranny. Our own history of struggle has been shaped and redefined by this act and now with the hunger strikes against the isolation of Abdullah Öcalan coming to an end, we are now at a critical moment where we will begin to see, and embark into, a new era of resistance against fascism and the reactionary forces of capitalist modernity.