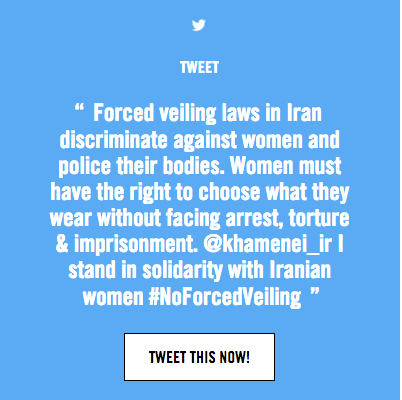 Under the country’s compulsory veiling laws, women and girls – even those as young as seven – are forced to cover their hair with a headscarf against their will. Women who do not are treated as criminals by the state

Imagine that you are a woman leading a relatively normal life. You take the metro or bus to work or university. You socialize with friends. You may be able to afford a smartphone and enjoy posting selfies on social media. You may sometimes be lucky enough to take walks on the beach and feel the sea air in your hair.

Now imagine that before you step foot outside your front door to do any of those things, you must stop and check that your hair is properly covered with a headscarf and that you have covered up your arms and legs.

This may seem extreme but failing to do so could carry serious consequences for you. You know that, as soon as you leave your home, your body and clothing will be assessed by strangers. You will face “morality checkpoints” where state agents will decide if you have failed to comply with the state’s strict dress code for women. If you “fail” their test, you may be arrested and, in some cases, even tortured and sentenced to a prison term or flogging.

So, every day, before you leave your home, you must decide the level of risk you are willing to take. Do you want to exercise your freedom today and wear what you want, or will you play it safe to avoid arrest, assault and being denied entry to your work place or university?

Not a fictional dystopia

This may sound like a fictional dystopia, but it is not. This is the reality for millions of women and girls in Iran, where the state heavily controls women’s bodies.

Under the country’s compulsory veiling laws, women and girls – even those as young as seven – are forced to cover their hair with a headscarf against their will. Women who do not are treated as criminals by the state.

Iran’s “morality” police place the entire female population – 40 million women and girls – under surveillance. These state agents drive around the city and have the power to stop women and examine their dress, scrupulously assessing how many strands of hair they are showing, the length of their trousers and overcoats, and the amount of make-up they are wearing.

The punishment for being seen in public without a headscarf includes arrest, a prison sentence, flogging or a fine – all this for the “crime” of exercising their right to choose what to wear.

Even when women cover their hair with a headscarf, they could still be deemed as having fallen short of forced veiling laws if they are, for example, showing a few strands of hair or their clothes are perceived as being too colourful or close-fitting. There are countless stories of the “morality” police slapping women across the face, beating them with batons and throwing them into police vans because of the way they are dressed.

But the policing of women’s bodies is not confined to the state. Iran’s abusive, discriminatory and degrading forced veiling laws have enabled not only state agents but also thugs and vigilantes who feel they have the duty and right to enforce the Islamic Republic’s values to harass and assault women in public. Consequently, on a daily basis, women and girls face random encounters with such strangers who beat and pepper-spray them, call them “whores” and make them pull their headscarves down to completely cover their hair.

In the last few years, a growing movement against forced veiling laws has emerged inside Iran, with women and girls performing courageous acts of defiance. They stand in public places, silently waving their headscarves on the ends of sticks or share videos of themselves walking down the street with their hair showing – something many of us take for granted.

Men have joined this movement, too. So have women who actively choose to wear hijab – because the movement is about choice: a woman’s right to choose what to wear without fear of harassment, violence, threats and imprisonment.

The strength and force of this movement has terrified the Iranian authorities, who have waged a sinister crackdown in response. Since January 2018, they have arrested at least 48 women’s rights defenders, including four men. Some have been tortured and sentenced to prison terms or flogging after grossly unfair trials.

Making criminals of women and girls who refuse to wear the hijab is an extreme form of discrimination. Forced veiling laws violate a whole host of rights, including the rights to equality, privacy and freedom of expression and belief. In the end, these laws degrade women and girls, stripping them of their dignity and self-worth.

Among the many brave women’s rights defenders who have stood up to Iran’s forced veiling laws is Nasrin Sotoudeh, a prominent human rights lawyer. In March 2019, she was sentenced to a total of 38 years and six months in prison and 148 lashes after being convicted in two separate grossly unfair trials. Some of the charges against her, including “inciting corruption and prostitution”, stem from her work as a lawyer representing women arrested for protesting against forced veiling laws, her own opposition to forced veiling, and removing her headscarf in prison. She must serve 17 years of this sentence.

In April 2019, shortly after Nasrin Sotoudeh’s sentencing, Yasaman Aryani, her mother, Monireh Arabshahi, and Mojgan Keshavarz were all arrested after posting a video that went viral on International Women’s Day. In it, they are seen walking without headscarves through a Tehran metro train, handing flowers to female passengers. “The day will come when women are not forced to struggle,” Monireh Arabshahi is heard saying while Yasaman Aryani hands a flower to a woman wearing a hijab, saying she hopes to walk side by side in the street one day, “me without the hijab and you with the hijab”. Sources say that because of this video, Yasaman Aryani and Monireh Arabshahi are facing charges that include “spreading propaganda against the system” and “inciting corruption and prostitution”.

Vida Movahedi has been sentenced to one year in prison for her peaceful protests against forced veiling. She remains in prison since her arrest in October 2018, when she staged a solo protest by standing, without a hijab, on top of a large dome structure in the middle of Tehran’s Enghelab (Revolution) Square and waving coloured balloons in her hands. Vida Movahedi was among several prisoners granted a pardon by Iran’s Supreme Leader to mark the 40th anniversary of the 1979 revolution in February 2019, but prison authorities have refused to release her.

Nasrin Sotoudeh’s husband, Reza Khandan, was arrested in September 2018 after he posted Facebook messages about human rights violations in Iran, including the prosecution of women who protested against forced veiling laws. In January 2019, he and Farhad Meysami were sentenced to prison terms for their support of the women’s rights movement against forced veiling. They were both convicted of “spreading propaganda against the system” and “gathering and colluding to commit crimes against national security” and sentenced to six years in prison.

The policing of women’s bodies and lives in Iran is not restricted to their clothing choices. However, it is the most visible and one of the most egregious forms of the wider oppression of women and it also stokes violence against them.

Because of this, Amnesty International is highlighting the brave actions of the women and men campaigning to end Iran’s forced veiling laws and is demanding that the Iranian authorities free the women’s rights defenders who remain in prison.

Stand in solidarity with millions of Iranian women and girls who continue to struggle for their rights by sharing this blog.

Except where otherwise noted, content in Amnesty International Materials is licensed under a Creative Commons (attribution, non-commercial, no derivatives, international 4.0) licence.