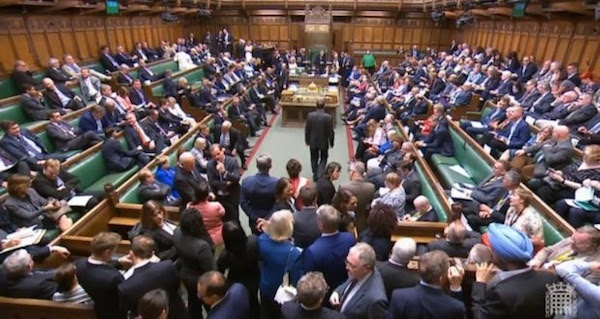 Stormont to determine fate of Brexit and Westminster

A majority of 41 approved an amendment that blocks suspension of Westminster between 9 October and 18 December, unless Sinn Fein, the DUP, Dublin and London all agree to bring back the Six County power-sharing Executive.

The bizarre legislative manoeuvre is a result of parliamentary tactics to block a hard Brexit. The amendment resulted from a number of changes to legislation initially passed last week to continue ad hoc Direct Rule and postpone an Assembly election in the North.

There is concern that the likely next British Prime Minister, Boris Johnson, intends to prorogue or suspend Westminster in order to force through a no-deal Brexit, crashing Britain out of the EU and disastrously taking the Six Counties of the north of Ireland with it.

Today’s development has dramatically increased the linkage between the Brexit crisis and the ongoing political crisis in the North.

Political commentator Robert Peston said: “If Boris Johnson wants to prorogue or suspend parliament to force through no-deal, the only way he can now do so — to get round NI bill amendment — is to somehow restore devolved government by mid October. Fascinating to see if that now becomes top priority for him and the DUP.”

Last week, the traditional disinterest of the Westminster parliament to events the north in Ireland came to a sudden end when amendments were passed by Labour MPs, with the acquiescence of the current London government under Theresa May, to introduce abortion and same-sex marriage in the Six Counties.

That was a significant shot across the bows of both the DUP and the Hard-Brexiteers led by Boris Johnson. But today’s development is another steep escalation in a political civil war in Britain.

One of those to support the measure was London’s culture, media and sport minister Margot James, who resigned from her post to do so. Among a series of other British cabinet ministers who did not vote and who are understood not to have had permission to miss it were the chancellor, Philip Hammond; the justice secretary, David Gauke; the business secretary, Greg Clark; and Rory Stewart, the international development secretary. The current British Direct Ruler Karen Bradley also abstained.

The scale of the victory highlights the struggle Johnson will have to impose his will over a parliament without a Tory majority and where Conservative internal discipline has almost collapsed.

The DUP said the vote was “designed to weaken the hand” of the next prime minister. But Sinn Féin’s Máirtín Ó Muilleoir said Brexit ‘sabre-rattling’ from Boris Johnson must be faced down by the Dublin government and the EU if he becomes the next British Prime Minister.

Mr Ó Muilleoir said: “To date there has been nothing genuine or sensible coming from either of the two contenders to succeed Theresa May as Tory Leader and British Prime Minister.

“Boris Johnson and Jeremy Hunt have been pandering to the hard-right in the Tory Party by dismissing the Backstop and stressing their willingness to leave the EU without a deal on October 31st.

“Boris Johnson in particular has been so adamant about a no-deal Brexit that EU Chief Negotiator Michel Barnier has stated that Britain will have to ‘face the consequences’ of leaving without an agreement.”

Mr Ó Muilleoir pointed to official reports which have warned that a no-deal Brexit would plunge Britain into recession.

“That is the reality of the economic catastrophe that Boris Johnson and his supporters in the DUP are prepared to foist upon these islands,” he said. “If, as expected, he does become the next British Prime Minister, this reckless sabre-rattling and posturing must be faced down by the Dublin government and the rest of the EU 27.”