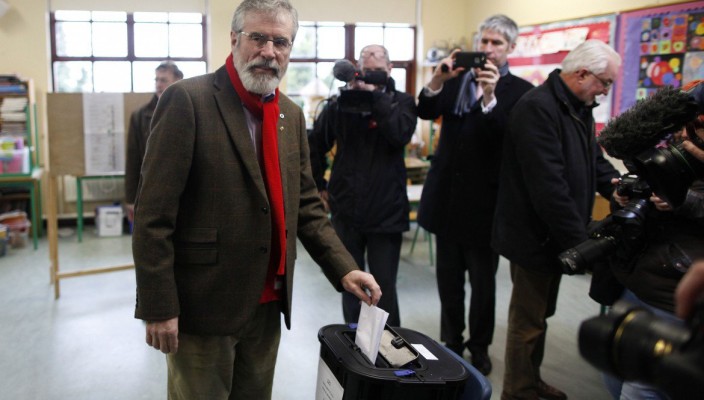 Voting for the next President of Ireland

The right of citizens living outside the southern State to vote for the President of Ireland is now a significant issue of debate, especially here in Dublin. Last week ‘Voices for Irish Citizens Abroad’ (VICA) visited the Oireachtas to engage with TDs and Seanadóirí on the referendum, which is to be held in October or November.

That evening they held a public meeting in the EPIC centre on the Quays. EPIC is the Irish Museum of Emigrants and tells the story of the millions of Irish who left our shores as a result of poverty, hunger, economic crisis or political repression. It was a very appropriate venue for a very informative and encouraging engagement.

Four years ago I asked the then Taoiseach Enda Kenny when the referendum on extending the franchise in Presidential elections, as supported by the Constitutional Convention in 2013, would take place. He refused to set a date. But Kenny’s reticence didn’t succeed in pushing the issue off the political agenda. On the contrary, Sinn Féin and others, especially from within the diaspora, continued to lobby for the right to vote for the President to be extended to citizens living in the North and within the diaspora.

In February speaking in the Dáil An Taoiseach Leo Varadkar explicitly set out his agenda for such a referendum. He said he wanted to hold the referendum in October. His proposal was that all citizens, wherever they live in the world, “will be entitled to register to vote for the next President.” It will be a postal ballot for those not living in the state and it would not be linked to a passport because there are citizens who do not have passports. He said: “As a result it will be linked to citizenship”.

Last month I asked Mr. Varadkar when he expected the legislation to facilitate the referendum to be published. He said he expected it to be published before the Dáil went into recess for the summer on July 11th. This was necessary in order to ensure that any legislation had time to pass through all stages in the Dáil and Seanad to ensure the referendum could be held on time.

When the Bill wasn’t published Mary Lou McDonald raised the issue with Mr. Varadkar last week. The Taoiseach told her that the plan is for the Bill to be published by the end of this month to allow for the establishment of a referendum commission. Subject to no hiccups he expects the referendum “in October or November of this year.”

So, if Mr. Varadkar is true to his word the legislation will be published within the next fortnight. However, given the delays that have occurred to date vigilance is required to ensure that these commitments are honoured.

But agreeing the date and passing the legislation is only one part of the battle ahead. Holding the referendum is important. Winning the referendum is essential. Already there are some voices being raised within the southern political and media establishment opposing the proposal.

The arguments against a referendum and for a NO vote include the claim that the current electorate would be swamped by the diaspora and voters from the North. The proponents of this view warn against a President being elected who is not supported by people who live within the 26 counties.

Of over 120 countries around the world who allow their overseas citizens to vote in elections none has ever raised a concern about this aspect of it. On the contrary the evidence suggests that the relatively small number of citizens abroad who do vote in elections generally follow the pattern of those living within the state.

Another argument heard is a variation on the slogan from the American Revolution’s ‘no taxation without representation’. In this instance it has become ‘no representation without taxation.’ In short if you don’t pay taxes you shouldn’t be allowed to vote. This is a deeply flawed position which if followed through logically would mean that pensioners, citizens on low incomes, parents who stay at home with their children, citizens with a disability, in fact anyone who doesn’t pay taxes for any reason should not have the right to vote.

The reality is that the right of a citizen to vote is not and cannot be dependent on whether they pay taxes. Implement the taxation clause and you are on the downward road to the sort of institutionalised structural discrimination that existed in the North for decades when citizens who were not rate payers had no vote in elections. Tens of thousands, mostly Catholics, were disenfranchised as unionist councils simply refused to build homes for them. No home – no payment of rates – and no vote.

Leo Varadkar in response to this same argument pointed out that it “the Dáil sets taxes and passes legislation which applies to people who are resident here. The Presidency is different. The President does not set taxes and does not make laws.”

The Office of the President and the role of the Presidency in the day to day life of the Irish nation is hugely symbolic and important. The President performs a largely ceremonial role and occasional constitutional duties when instructed by the government. She or he is above party politics. Even when the President has come from one particular party the role is accepted to be strictly non-partisan in its nature. It is about promoting Ireland abroad. The President is the guardian of the constitution and is about promoting a shared civic sense. The President, as we have seen in the past is also uniquely placed to engage with our unionist neighbours. To reach out and be a voice for the voiceless, and an advocate for the disadvantaged and dispossessed.

A successful referendum campaign which actively seeks to encourage those who are unionist to vote for the President would set a powerful example of the kind of shared, fair and equality based society we all want to build on our island. A new union of people. A Yes vote would be a demonstration of generosity and inclusiveness. It would be an invitation to contribute to and participate in the political life of the nation. It would be an important step forward in modernising Irish citizenship and the institution of the President itself.

Finally, in the past, especially around the peace process and the Good Friday Agreement, the role of the diaspora was very important. Permitting Irish citizens living overseas to vote in Presidential elections would send a powerful, positive signal to the diaspora that they are important to us now and in the future. That can only be good.

So this is a campaign for you dear reader. If you live in the North or if you are one of the global Irish you should find a way of asking the Southern electorate to give you your vote. Ask them to vote for the vote. Remember one hundred years ago women were denied the vote. Fifty years ago citizens in the North were denied a vote. We are still denied this vote. If former President Mary McAleese had stayed in Ardoyne she could not have voted for herself when she stood in the Presidential election. Martin McGuinness had no vote when he stood. We can now change this. Let’s do it.