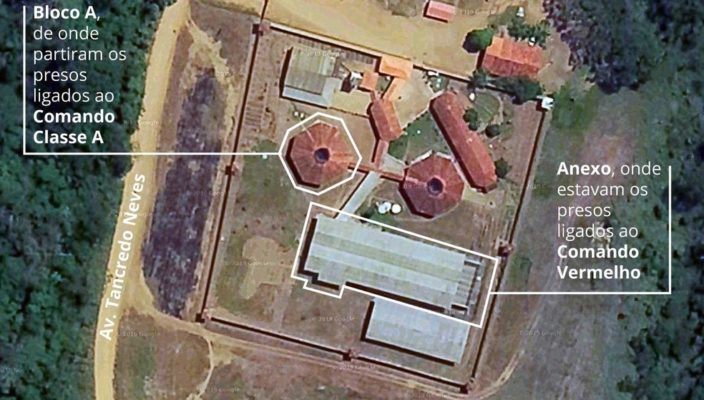 At least fifty-seven prisoners died, sixteen of them allegedly beheaded, after the rebellion in a prison in Altamira, in the northern state of Pará, in Brazil

This is the most violent episode in Brazilian prisons so far during Jair Bolsonaro government: the previous one was in May and left fifty-five victims in Manaus, capital of Amazonas.

It all started this Monday around seven in the morning in a prison of Altamira, in the east end of the Amazon that for some years has become a corridor for Colombian drugs destined to the European market and therefore a dispute territory between factions.

A cloud of black smoke was seen from inside the Altamira prison where Class A Command members set fire to a bloc occupied by their rivals of the Vermelho Command, one of the oldest organizations in the country formed decades ago in the favelas of Rio de Janeiro.

The attackers left bloc A with torches and blades seized in the kitchen of the prison, according to information from the Superintendence of the Penitentiary Service of Paense. Two prison officers were held hostage and then released.

Dozens of inmates died asphyxiated or calcined amid the burning mattresses inside the metal and concrete bloc, where the experts of the Legal Medical Institute would only enter late in the afternoon due to the high temperature of the material.

A wall surrounds the prison in front of which the partners of the inmates met, the same women who had already protested in that place two months ago demanding the separation of the factions in order to prevent the confrontation that finally occurred.