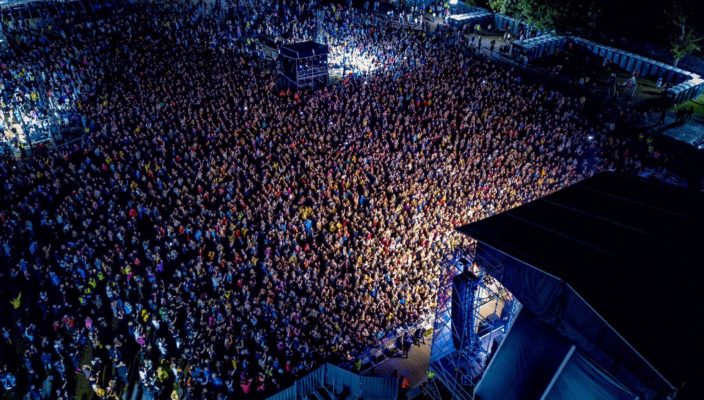 Comhghairdeas to all of those who made it happen. To everyone involved in planning, organising, or participating in this year’s Féile. The best ever. Buiochas to Kevin and the entire Féile team. Well done. As Emma Goldman said “A revolution without dancing is not a revolution worth having.” She was right.

Dancing is an essential part of Féile an Phobail. And singing. There were sold out concerts in the Falls Park – Boyzone, Wolftones, and Dance night. Other seisúns everywhere. The Michael Conlan Fight Night was televised live to millions of people across the world on BT Sport and ESPN+. Phil Coulter packed out Clonard Monastery. Féile comedy night was hugely successful. There were dramas, art exhibitions,film, debates and discussions, lectures, the carnival parade, sporting events, and the visual arts. And the Cribby World Championship.

There were also an unequalled series of debates and discussions – over 75 in total – making Féile an event to rival any of the summer schools that take place across the island of Ireland. The main themes for the debates this year were Irish Unity, including a referendum on Unity, the imperative of engaging with unionism on this, building an all-Ireland health service, the made a keynote contribution on the issue of the so-called British subvention. Breaking it down and explaining that it is not as great as claimed and concluding that unity is affordable.

On the Monday night John McDonnell, the British Labour Shadow Chancellor, was warmly welcomed as he gave the James Connolly lecture to a capacity crowd in St. Mary’s University College. Brexit and a referendum on Irish Unity were the big issues. McDonnell said that the constitutional future of Ireland was a matter for the Irish people.

This year the Féile organisers ensured that most of the debates and discussions were live streamed as they happened on the internet. Some were later put up on youtube. I have friends in the USA and Australia who watched the leader’s debate.

When we started we had a battle a day to get the tourism agencies interested in Féile and West Belfast. This year a major global Tourism Conference was held for the first time, hosted by Fáilte Feirste Thiar. It brought together tourism experts from New Orleans, Barcelona and many other places. World tourism expert Dr Terry Stephens was involved in organising the event.

The diversity of events was staggering. Discussions included – Stop Female Genital Mutilation: Belfast women and the vote, war and socialism (held in the Shankill Library): Who says that Protestants can’t be socialists (in Áras Uí Chonghaile): Collusion: The End Game with Professor Mark McGovern: The Conversation about Irish Unity with Professor Colin Harvey. Sean Murray’s expose of the Glenanne Gang – Unquiet Graves – was shown, as was the Ballymurphy Precedent. A play by Patricia Downey tells of the grief and trauma of Gina Murray, whose 13 year old daughter Leanna was killed in the Shankill Road bomb in 1993. The play received a standing ovation from the audience.

This is the other part of the Féile story. Féile an Phobail was born out of the devastation of war. West Belfast was a different place in 1988 when the first Féile took place. It was a community under military occupation. Thousands of heavily armed British troops patrolled our streets stopping and searching citizens. Those stopped were often abused. Homes were frequently raided and wrecked. There were menacing British military and RUC barracks scattered across west Belfast monitoring and controlling population movement. State collusion with unionist death squads, including their rearming with South African sourced weapons, saw hundreds killed across the North at that time and over the following years. Shoot-to-kill was government policy and part of the plethora of repressive laws used by the British state.

1988 saw the introduction by the Thatcher government of official political censorship and the extension of political vetting of community groups, including the denial of funding to crèches and other community groups. Discrimination in employment and housing, and unionist efforts to control local councils and exclude Sinn Féin representatives, were part of everyday life.

The catalyst for Féile was the killing in Gibraltar of three young people from this area in March 1988 – IRA Volunteers Mairead Farrell, Seán Savage and Dan McCann. In the two weeks following the Gibraltar killings a further nine people died – another four from this constituency. It was a tragic, depressingly sad time for the victims and their families but also for the citizens of west Belfast. They were demonised. Seamus Mallon, the then Deputy leader of the SDLP, said that the people of this area ‘have turned into savages’. Others said we were ‘animals’.

A small group of us got together and out of our conversations grew a community festival – a peoples’ festival – Féile an Phobail. It was to be our alternative to the bonfires and the riots that usually marked the August internment anniversary. It was our way of demonstrating to the world that the people of west Belfast are a generous, humorous, talented, gifted and inclusive community. It was to be positive, upbeat reflection of everything that is positive, and loving and hopeful. That first festival was, by the scale of recent years, very modest but it was also a huge success. This 8 August, there were no bonfires in west Belfast. Apart from one anti-community bonfire in the New Lodge, almost 12,000 young people participated in a dance night in west Belfast.

Now the Féile is Ireland’s foremost community festival. Despite all the begrudgers and the naysayers Féile an Phobail has gone from strength to strength. Our culture of resistance built over many decades has transitioned into a culture of change. Of reconquest. Of dancing and singing.

So, well done to everyone who over the last 31 years has played any part in this inspirational story of resistance and change. Maya Angelou’s words speak to all of you.

“Leaving behind nights of terror and fear

Into a daybreak that’s wonderously clear

Bringing the gifts that my ancestors gave,

I am the dream and hope of the slave.