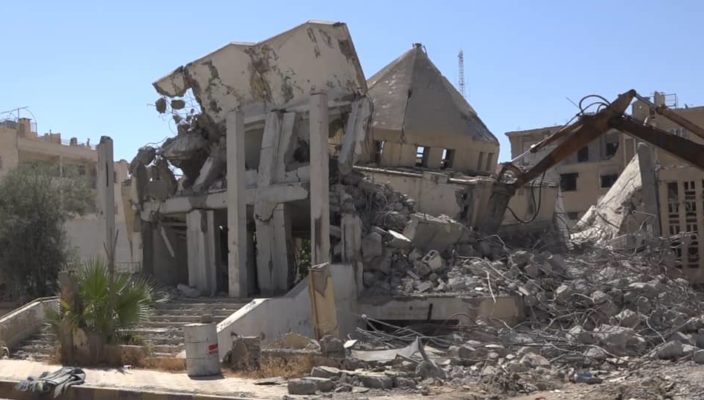 Raqqa: Back to Life

Raqqa was the city ISIS jihadists proclaimed the capital of their Caliphate. It is also one of the city which suffered most and witnessed inhuman massacres, beheading, violence difficult to express with words

The Kurdish-led Syrian Democratic Forces liberated the city on 20 October 2017. Since then the city has begun to rebuild itself. Some 85% of the city and its infrastructures had been destroyed by ISIS, yet the deepest destruction had to do with life itself. People lives were destroyed, families, children.

Some of the survivors of the dark years of the Caliphate say that life stopped during those times.

Yet, life prevailed. And the newly declared Autonomous Administration has been working since the liberation of the city to rebuild it.

Within the scope of the coordinated activities of the Raqqa Civil Assembly and the People’s Municipality, roads were re-opened, houses and water were started to be supplied to the neighborhoods and the war debris removed.

With the reconstruction of the city and the development of a free and common way of living, 700,000 people who had fled ISIS have returned to their homes.

With the increase of the population, the reconstruction works accelerated. The People’s Municipality of Raqqa announced an amnesty for those who had repaired their destroyed houses without permission and offered assistance to put the houses at norm.

The municipality also granted 2,000 new building licenses in the city and granted new licenses for the reconstruction and repairation of the 800,000 buildings destroyed by the war.

Stating that 700,000 residents returned to their homes thanks to the activities carried out, co-chair of the Organizing Bureau of the Raqqa Civil Assembly, Luey Isa said that the city also houses about 80,000 refugees.

Confirming that residents who returned had difficulty in the early days due to inadequate services, Luey said: “This problem was solved when the region was safe once again. Residents now return to their homes in confidence and peace. The return of the people of Raqqa who were forced to migrate to areas under the control of the Syrian regime, is still going on.”

According to the laws and title deeds, residents of the city are given the license for the reconstruction of their homes or landowners.