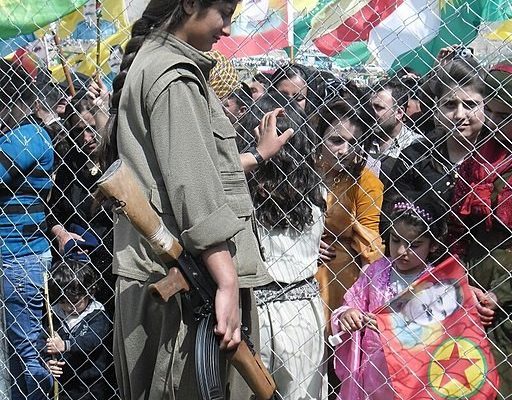 We, the women and children from the free women’s village JINWAR in Northern Syria, write this letter to you, who were in contact with us or had the opportunity to visit us. During your time here you could get to know us, our village, and our daily life. You could see what we have built up: the houses made of clay, in which we live together, the school, the healing center for natural medicine which is supposed to be opened soon, our bakery, the garden, the fields, all the trees, which grow bigger and bigger and all of all our common life, far away from oppression and violence, based upon our will to live together as free women and children.

All this is now under direct threat by the Turkish State, which openly launches attacks against Northern Syria. Erdogan’s plan is to extinguish the Kurdish people and to occupy our region. We can see the results of this politics in Afrîn, which has been occupied by Turkey, DAIŞ and other Jihadist groups. The situation in Afrîn turned out really bad for the people, especially for the women, whose rights are taken away, who suffer from violence and rape, who are sold and treated as slaves. The attacks and another occupation by the Turkish state in other parts of Northern Syria could mean the same brutal exploitation for women here.

JINWAR is a place where women are able to live in a communal way and autonomously raise and educate their children freely and without huge daily influence of the dominant male mentality. Many brave women and men fought and gave their lives, in order to liberate this territory and make the possibility to build a new democratic system inspired by the concept of Democratic Confederalism. This system is based on ideas of Abdullah Ocalan concerning women’s freedom and self-administration of different ethnic and social groups, which are living here side by side together. Our village JINWAR is a part and in the same time a result of this revolutionary process. Furthermore, it is also a practical example of how we, as women, can create alternatives in fields such as communal living, ecology and economy. During this process many things have been built here in Rojava: Women are organizing autonomously in every city. Examples of this are “Kongreya Star” and “Mala Jin” (Women’s houses), where women are gathering and developing solutions for problems of the whole society. In the “Mala Jin” women are supporting each other in solving conflicts in families and the whole society. Women’s leadership and participation in decision making processes is also a key component of the direct democracy model being enacted in Rojava. Through that women could gain a new position in society and in politics. These achievements can be an example for all the women in the world.

In the moment we are writing this letter different villages and places around have been bombed and many people have already been killed. Our village, our society, our lives and the life and future of all people here, especially women and children, is under urgent threat.

We, as women and children from JINWAR call you to raise up your voices and take action against this war. Use all the possibilities you have to spread information and raise awareness about the Turkish occupation politics! Don’t stay silent! Lets stand up together for free life and for our common future!

Image: Kurdish PKK guerilla at the Newroz celebration in Qandil