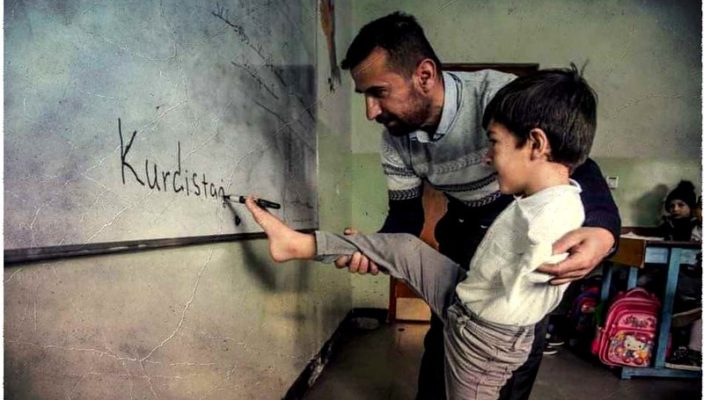 These are Words Hung by the Neck

The angelus of wars my chest evokes

hung by the Neck

The angelus of wars my chest evokes

in the middle of the night

how come we have to live

in such a prison?

Why is it so dark?

Where has all the light gone?

why they are orphaned and so unloved

and how they are used as weapons

when in past lives

whose tongues way below

were barely raised out of the mud?

Here there are words

must have been abandoned

lurking among the trash, homeless

and almost evicted from language itself,

words on TV when you can’t pull the plug

words that assaulted your sister, your mother,

it never rains on

“Let’s fucking kill him! Let’s go in. Let’s kill the fucking lot of them”

words instead of singing

went into politics and made money

words that hid in the dark

words that made it up the ladder

went down into the sewers

words that gave birth to secrets

These are words no one wants to hear

(in the Islamic Republic of Iran:

“spreading propaganda against the system”

“gathering and colluding to commit crimes against national security” )

words everyone is afraid to laugh at

“openly disparaging the state, the government, the judiciary, the military

and the security forces of the Republic of Turkey”

words of men (not really men)

“…insult to Turkey[3], the Turkish nation[4], or Turkish government institutions”

“Insulting a public official for their duty”

“open incitement to defy the law”

“slander of a public official…)[6]

in so many places

left lying in the gutter with our dreams

no one is there.

hung by the neck,

armed to their teeth

words it will take centuries

to drain the hate from

the greed from, the cruelty,

words without brothers or sisters

words abandoned by the side of the road, among

ruins, beneath the wreckage, after the

soldiers have left, after the killing

These are words that tore the mask

from the face of monsters

words that wrote chapters in a history book

words you could not believe

if you stood there

wondering what planet you had

and where these cynical

these generals, thugs and hooligans

those with their fucking mouths on fire.

And their cold cruel hearts 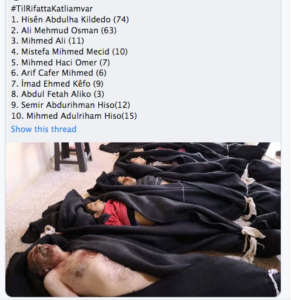 Following Turkey’s 2018 cynical and murderous assault on language (to say nothing of the beings that speak it) Operation Olive Branch (Turkish: Zeytin Dalı Harekâtı)), on December 2, 2019 as part of (the equally murderous and cynical) Operation Peace Spring (Turkish: Barış Pınarı Harekâtı), Turkish artillery, shelling near a children’s school in Tal Rifaat, northern Aleppo, killed 8 children, all were under the age of 15 along with a number of adults and many injured… (‘Tal Rifaat Massacre’)

“Our mission is to prevent the creation of a terror corridor across our southern border, and to bring peace to the area,” Turkish President and Chairman of the ruling Justice and Development Party, Recep Tayyip Erdoğan (of “Democracy is like a tram; you get off when you have reached your destination.” fame) said, adding, “we will preserve Syria’s territorial integrity and liberate local communities from terrorists,” https://www.aa.com.tr/en/operation-peace-spring/operation-peace-spring-starts-in-n-syria-erdogan/1607147#!

The Kurdish Red Crescent (Heyva Sor) released their report detailing the Turkish massacre of eight children alongside two adults in Til Rifat town of the Shehba Canton on December 2nd.

The Broken Tower, by Hart Crane is from The Complete Poems of Hart Crane – The Centennial Edition, from Liveright Publishing, © 1932, pp. 160 and 161.

[7] (It comes under article 293 of the 1997 revision of the People’s Republic of China’s Penal Code, and carries a maximum sentence of five years)  https://en.wikipedia.org/wiki/Picking_quarrels_and_provoking_trouble)

[8] Philippines president Rodrigo Duterte in his own words