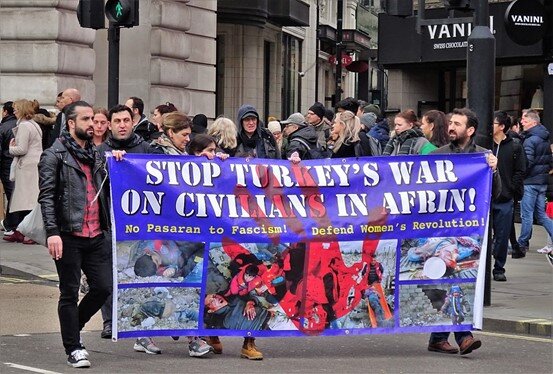 Afrin was once in a Kurdish majority region where women had more rights than elsewhere in Syria, a patriarchal country in a bloodthirsty war

“He threatened to kill my daughter, rape me, take pictures and distribute them to everyone. He forced me to watch the cruel torture of women. It was so bad that I became ill just by the sight”, says an unnamed woman in a video detailing her capture in Afrin, northern Syria.

Afrin was once in a Kurdish majority region where women had more rights than elsewhere in Syria, a patriarchal country in a bloodthirsty war. Child marriage was banned, polygamy was forbidden and domestic violence was an offence.

The city was safe through much of the Syrian war and was a sanctuary which welcomed everyone. Shiler Sido, a 31-year-old former Afrin resident and volunteer with the Kurdish Red Crescent tells openDemocracy: “We had a free atmosphere where everyone presented themselves, especially women, as they wanted. You could wear shorts, skirts, short dresses – anything”.

“There was a very low level of crime. It was special for somewhere in Syria to have this kind of safety. There was a utopian atmosphere and it was very peaceful”, Shiler reminisces.

But this soon changed.

Since 2018, Afrin has been under the control of Turkish backed militias who seized control of the city after a two-month operation to remove Kurdish forces. For many civilians in the city, it is like living under siege.

In March 2018, Shiler and her family fled their five bedroom home, “the city could no longer stand under the factions”, she says.

A climate of fear

A recent UN commission has found vast evidence that the “situation for Kurdish women is precarious”. The UN Commission of Inquiry on Syria found vast evidence of daily rape, sexual violence, harassment and torture in the first half of 2020. It cites disturbing examples of violations and targeting kidnapped civilians in Afrin. The report documents the rape of at least 30 women in the Kurdish town of Tal Abyad in February alone. “The factions are committing hundreds and thousands of violations every day. My relatives are there”, Shiler says with a worried tone.

A video earlier this year showed women being led out a secret, illegal, crowded prison cell. The Syrian Observatory for Human Rights reported that they were naked when they were found.

These atrocities mirror what happened to the Kurdish population at the hands of ISIS, just a few years earlier in parts of Iraq and Syria. But these women are not being tortured by a militant Islamist group. They are under the control of militias backed by Turkey, a NATO member and ally of the United States.

There is now “a pervasive climate of fear of torture, to the point where women are unable to leave their homes because they don’t want to be targeted by an armed group”, says Meghan Bodette, founder of the Missing Afrin Women Project. She launched the website in 2018 to track the disappearances of women in the area, a huge concern alongside torture.

173 women and girls have allegedly been kidnapped since January 2018. Only 64 have reportedly been released while the fate of the 109 others remains unknown. Meghan talks about a “complete campaign of terror against the Kurdish population.” Other local human rights researchers claim there have been over 1,500 kidnappings. It is worth noting that Meghan only documents women whose full identities she has.

Many Kurds fled Afrin in 2018, including Hassan Hassan, age 50, who tells openDemocracy how his family escaped only “with some food and the clothes on our backs, leaving behind our home, photo albums, lifelong books, children’s toys, furniture and electricals.”

The Hassan family fled to a village and lived in a cave for 45 days, “there was daily shelling, F-16s and drones in the skies. We escaped the siege with god’s grace.” Now they live in the dismal Shahba camp near Aleppo with other IDPs, including Shiler and her three children.

Hassan and Shiler left behind some 200,000 Afrin residents. Those who stayed risk torture and abduction. Hassan’s cousins, friends and neighbours have all gone missing.

Their new life is not a respite from the suffering. “Yesterday we couldn’t sleep because of the loud shelling noises”, Shiler says.

The area where the camp is located was under the control of ISIS once and they planted hundreds of landmines. Shiler witnessed lives lost, she walks past bodies daily. “We endure this kind of life because we feel geographically close to home,” she explains.

A year ago this month, Turkey’s President, Recep Tayyip Erdogan invaded the Kurdish enclave in Syria to “eliminate all elements of PKK [Kurdistan Worker’s Party], PYD [Democratic Union Party] and YPG [People’s Protection Units]”, who he deems as terrorists. He described this as a “safe zone”, which is 300 miles wide along the border. The violence was triggered by Donald Trump’s order to withdraw all US troops from northern Syria.

Human Rights Watch, say the reality in the “safe zone” is one of horror with daily lootings, executions, shootings, and forcible displacements. Sarah Leah Whitson, Middle East director at Human Rights Watch says there is “damning evidence why Turkey’s proposed ‘safe zones’ will not be safe.”

Meghan cites Trump’s withdrawal as a trigger for many “domestic political ramifications in the United States”, which made the western media sit up and take notice of the murders much more thanks to a somewhat new American political angle.

One such example was the murder of Hevrin Khalaf, a Kurdish-Syrian politician and civil engineer, who was tortured and executed during ‘Operation Peace Spring’, the 2019 Turkish offensive into north-eastern Syria. A Bellingcat video traces her death to Turkish backed rebels. Others have reported that Ahrar al-Sharqiya, a Syrian rebel group that fights as part of the Turkish-backed Syrian National Army, were involved, despite their denial.

Khalaf’s murder was depicted in conservative daily Turkish newspaper Yeni Safak as a successful counter-terrorist operation, which couldn’t be further from the truth. Khalaf dedicated her life to democracy and feminism. The autopsy stated that she was so violently dragged out of her car that her hair was pulled off her head, she was then shot in the head at close range and died as a result of severe cerebral haemorrhage.

Meghan is concerned about the “very nationalist, expansionist policy in Turkey”, which she says extends to Syria and is a huge danger to ethnic and religious minorities. “As long as they hold territory in Syria, there’s going to be a risk that they’re going to try to invade and occupy more”, she continues.

A report from the Rojava Information Centre reveals that over 40 former ISIS members are “being sheltered, funded and protected by Turkey in the occupied regions” and are working in Afrin. Shiler who is a former teacher, says that her school which once housed over 200 pupils is now a centre for Turkish intelligence, and a picture of Erdogan is in the middle of Afrin. Hassan claims that his farm is now “appropriated by ex-ISIS fighters.”

It happens to us all

The mention of ISIS alone is worrisome, particularly for Yazidi women – the religious minority that suffered genocide at the hands of that militant group. Amy Austin Holmes, a visiting scholar at the Middle East Initiative of Harvard University and a fellow at the Wilson Center, says that an “estimated 90% of the Yazidi population of Afrin has been driven from their homes.” How can this community survive with so much persecution over the years?

Dr Jan Ilhan Kizilhan, a prominent Kurdish-German psychologist who works with Yazidis speaks of the collective trauma Yazidis face. “The whole community is directly and indirectly impacted by the killings. You become a part of this collective trauma. If you are suffering you may get nightmares, sleeping disorders and a feeling of helplessness.”

Jan says this is what is happening in Afrin too. “[militants] are committing rape, but they’re also destroying the dignity of society. It’s an attack on your understanding of the world, because the question is, how can a human do this?”

This view is shared by Hassan and Shiler. “When we hear about what happens to the women, we feel like it happens to all of us. It is hard for others to understand the impact on us psychologically”, Shiler says. Hassan, on the other hand, believed that his father recently died “from sorrow”.

The UN commission also details the looting and destruction of religious sites, shrines and graveyards of profound significance in the Afrin region.

Too little, too late

The UN report has ratified Meghan’s findings. While she is thankful for that, she explains that “as soon as these groups controlled territory, they started committing atrocities against civilians. So I think it’s very much too late.” It is very difficult for journalists to access this area, and those who do speak out, risk their lives.

“The media aren’t allowed in the area, so the number of violations committed every day is not known by the people of Afrin. People make the decision to die in their homes instead of going out because they’re so scared”, Shiler says.

Such reports should be used as an advocacy tool for the UN to sanction states who commit crimes. Currently, the United States has not sanctioned any Turkish-backed armed groups and they’re allowing demographic reengineering of Kurds, many of whom lost family fighting ISIS alongside US forces.

Meanwhile the US and UK also hold responsibilities. The UK halted new export licences for arms sales to Turkey, but the existing export licences are still valid for use.

“Turkey doesn’t care if these violations happen, they’re happy with anything that makes life miserable for the Kurds. But I think that they do not like people internationally talking about it and paying attention to it,” Meghan reflects.

Shiler on the other hand, thinks that the occupation “is like hell.”