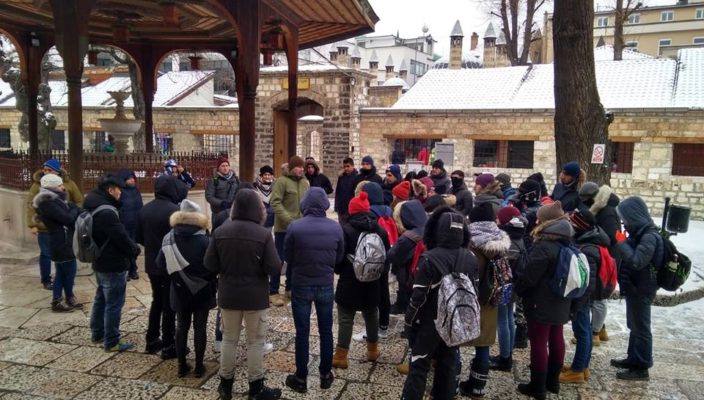 Bihac, on the border of Europe – Part One

A delegation from Pordenone, led by social cooperative Noncello, has traveled to Bihac, Bosnia, to monitor the situation of refugees on a route which is not on the media spotlight

The young Bosnian policemen stop three migrants walking through the streets of the center of Bihac, a town of just over 60 thousand inhabitants, which since last January has faced the constant and uninterrupted flow of women, men and children moving towards Europe, but out of the media spotlight.

They smile at each other, the scene does not show tension. They speak in gestures and then the two in blue uniform move away towards the main road while the three men wrapped in blankets to defend themselves from the humidity return on their steps along the river, towards the field that welcomes them a few hundred meters from there.

The north of Bosnia and the cantons that are close to the border with Croatia, from January 2018 have become part of the route followed by refugees on their journey to a dignified future.

Bihac, Cazin, Veluka Kladusa are the collection points where they stop before throwing themselves into “The game”, the game as it has been called with tragic irony for years: finding the lucky passage through which to jump saving themselves from the police batons in Zagreb and continue towards a new stop of the long way.

Greece, Macedonia, then Serbia. Today Bosnia, with constancy without surrender.

The sepulchral silence of the government

“I remember that in January only small voluntary associations dealt with bringing some comfort and first necessity products to migrants, a few dozen men”. Salam Midzic secretary of the Red Cross of Bihac is the historical memory of last year’s events, those that have changed the face of his city.

He accompanies our delegation (led by cooperative Noncello) from Pordenone (Italy) to the formal camp where hundreds of refugees are housed.

With him, the representatives of the NGO Ipsia Acli  that from the beginning joined the local Red Cross in the rescue of migrants.

We climb on a narrow slope that winds through a green hill where many tents have been put up. Around them you can see the coming and going of young men numb for the gloomy day. They look at us without curiosity. Yet another group of visiting foreigners.

“When the number has increased and we have reached the hundreds of people, included entire families, the associations have surrendered and have turned to us for a more organized and widespread intervention.

The mayor of Bihac has instructed the Red Cross of the canton to take over the reins of receiving the refugees. I never thought that the situation would have evolved in this way “.

At the entrance to a semi-fenced area we are welcomed by a security guard who is given the forms with our identity details.

“He has been put here by the IOM (International Organization for Migration)  which is also trying to define the area where the building is located from the rest of the land occupied by tents”.

We arrive in a very crowded open space, which opens in front of an unfinished building, the gray walls, unplastered at points. It has no doors or windows, faces of men can be seen. Clothes hang to dry, a window is closed by a black plastic bag to protect from the stiff air.

“The migrants had already occupied this building, so we suggested to the mayor that for the time being it was suitable to tamper with the emergency. After months, we formally started our intervention on April 24th, it has become a stable situation. This is why we asked for support from international associations while we were hoping for the intervention of the central government. This had not come”. There is no anger in his voice, only a bitter consideration.

“But we are talking about funds that came from Europe to the Bosnian government. How were they spent? “, I ask him through the representative of Ipsia Acli Azra Handukic who acts as interpreter. “I do not know. It’s secret. But look around: sure here the money has not arrived here”.

In the space in front of the unfinished building, a sorting point has been placed for clothes and medical items; another – around which dozens of people are crowded – managed by UNHCR for the search for family members lost during the migration; then a place for first aid medicine. The Red Cross volunteers are many, young, committed to respond to requests.

“The construction of this building began in the 90s to house the youth home,” explains Diego Shaban Saccora (https://lungolarottabalcanica.wordpress.com/) , a Venetian expert on the Balkans who has been in Bihac for several months as a volunteer with Ipsia Acli.

“Then in 1992 with the outbreak of the war they were suspended. The city has suffered a severe siege, three years, by the Serbs of Bosnia, the Muslims of Velika Kladusa. The longest after the one imposed in Sarajevo. As you can see, it has never been completed “.

Around us young men move and sometimes stop to listen. In the upper part of the square the IOM has placed showers and toilets.

“Our kitchen, set up thanks to the help of the German Red Cross, works incessantly to prepare the three meals of the day” continues Salman. “Currently, the IOM finances a total of 2,600 meals, which we cook and distribute through our network of volunteers”.

Undoubtedly, the activities to supply the basic necessities and the medical device work: Ipsia Acli deals with providing products for personal hygiene while health care is guaranteed by the city hospital.

The logistic question remains more complex but urgent in view of the winter which in those areas is very cold.

“The OIM is taking care of the sewage system and has water and electricity connected to the building. It is now organizing the maintenance work on the roof and then installing the windows”.

But have you never thought about moving to more suitable structures? “Initially it was proposed to bring the refugees to Velika Kladusa because there are buildings completed as well as larger, former factories above all. But the mayor of Kladusa has not given his consent and the government did not follow on this”.