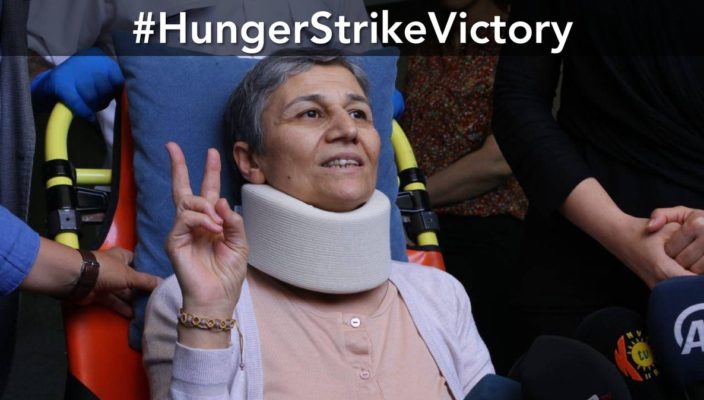 After 200 days of incomparable historical resistance, the hunger strikes in Kurdistan, Turkey and Europe have been declared over today

26 May: After 200 days of incomparable historical resistance, the hunger strikes in Kurdistan, Turkey and Europe have been declared over today. We send our warmest revolutionary greetings to all comrades who took part in the hunger strike and the many resistance actions and congratulate the free peoples on this victory.

On November 8, 2018 the Kurdish politician Leyla Güven had started her hunger strike to lift the total isolation against Abdullah Öcalan, the representative of the Kurdish people and philosophical thought leader of the revolution in Northeast Syria. More than 7000 political prisoners in the dungeons of the AKP-MHP regime and dozens of activists in all parts of Kurdistan and Europe joined this historical resistance and went on an indefinite hunger strike. 30 prisoners recently went to a death fast and found themselves in a critical situation. A total of 8 comrades sacrificed their lives in the prisons and in the Federal Republic of Germany in actions of protest.

Today we can state with great joy that this courageous and self-sacrificing resistance was crowned with success. On May 22 the lawyers of Abullah Öcalan were once again allowed to visit their client on the prison island Imrali and he addressed his message to the fighting activists and the whole world publicly. For eight years our friend, comrade and thought leader Abullah Öcalan was kept under total isolation and cut off from any contact with his lawyers and from the outside world since April 2015. Öcalan is today not only the political representative of the Kurdish people and not only the idea giver of the revolutionary project in Northeast Syria, but also the most important theorist of socialism in the 21st century. His paradigm of a grassroots democratic, ecological society based on the liberation of women has become a source of inspiration and a source of new courage for revolutionaries worldwide.

Thus solitary confinement is not only an attack on the Kurdish people but at the same time an attack on the democratic future of the Middle East and on all people fighting for a free tomorrow. The Revolution of Rojava has been the practical proof for seven years that Öcalan‘s theories can show a way out of the chaos in the region. They are a solution beyond the nation state, religious fundamentalism and imperialist intervention, which gives the peoples of the Middle East their destiny back into their own hands.

We are therefore, of course, delighted to receive news from Abdullah Öcalan and to see the AKP-MHP regime fall to its knees in the face of this historic resistance. Nevertheless, we must stress that the goal of Abdullah Öcalan’s freedom is far from being achieved with a few visits by lawyers. Nothing has changed in the rapprochement of the Turkish state and imperialism towards the revolution. Our common international resistance drove them into a corner but the struggle has only just begun. Abdullah Öcalan’s call for the creation of a free and new Syria and a democratic Turkey, as communicated today by the lawyers to the peoples of the region and to the world public, is a great challenge for all revolutionary and democratic movements. Just as we have fought for this success together, it is up to us to take the next steps.

We send our warmest revolutionary greetings to all comrades who took part in the hunger strike and the many resistance actions and congratulate the free peoples on this victory.

Down with Turkish fascism!

The revolution in the Middle East will win!