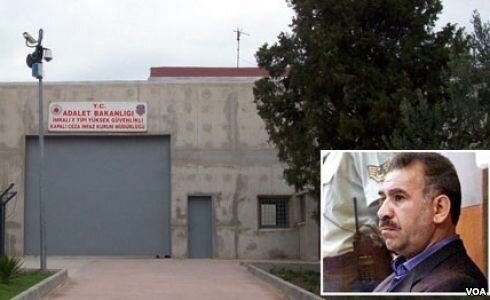 Freedom for Ocalan! Peace for Kurdistan!

The campaign “End Isolation, Fascism and Occupation – Time for Freedom” was launched on 12 September. The Kurds have now declared that 10 October will be a global Freedom for Ocalan Day

The campaign “End Isolation, Fascism and Occupation – Time for Freedom” was launched on 12 September. The Kurds have now declared that 10 October will be a global Freedom for Ocalan Day.

International support is gathering momentum for the campaign’s demands to free Ocalan and bring an end to Turkey’s aggression. Peace in Kurdistan is proud to lend its support to this campaign, and stands in solidarity with the Kurdish people in their renewed efforts to achieve freedom.

The widespread support for Ocalan among the Kurdish community inside Turkey and around the world has never been in any doubt; the need to widen the support is an essential step towards securing Ocalan’s freedom and thereby allowing him to play his rightful part in the process of peace-building between Turkey and the Kurds, as well as in the wider region. A negotiated peace in some form is the only credible means of achieving lasting peace.

Abdullah Ocalan is one of the outstanding political figures of the Middle East; not only is he an undisputed leader of the Kurdish people, he is an original thinker whose ideas have helped reshape the political landscape of the region.

Ocalan’s thoughts in favour of grassroots democracy and the emancipation of women have been put into great effect in the administration of Rojava in Syria, where the Kurds and their allies have exercised control in the aftermath of the conflict with ISIS (the Islamic State group). The establishment of Rojava has inspired many that a new Middle East, founded on the principles of democracy, freedom and equality, can be successfully achieved.

Peace in Kurdistan has long called for Ocalan to be freed, and has always seen him as a political prisoner. Additionally, PIK has argued strongly for Ocalan’s ideas to be taken seriously, and for his leadership of the Kurdish people to be respected. After all, the Kurdish people have repeatedly demonstrated their support for Ocalan throughout the years of his imprisonment. That support shows no sign of abating.

Turkey’s attempts to portray Ocalan as an ordinary prisoner have failed. Indeed, the extraordinary measures that they have taken to isolate and silence him demonstrate the falsity of that assertion and show that he is seen as a political threat.

Turkey has sought to deny Ocalan’s political role, but his stature and influence among the Kurds has increased during his incarceration. Turkey has been unable to silence Ocalan despite restricting his access to visitors. His ideas flourish outside and continue to guide the politics of the Kurdish movement, and are having an influence far beyond the region as well. The two decades-long isolation and mistreatment of Ocalan by the Turkish authorities has totally backfired.

Under President Erdogan, however, Turkey has opted for military intervention abroad and state repression internally to achieve a victory over the Kurds; a victory that can never be achieved and will only lead to the bloodshed of thousands more, and the permanent repression of the identity of an entire people. In adopting such a futile and reckless policy, Turkey has made itself a destabilising force in the region and become an unreliable ally for its partners.

Turkey is a factor in many of the conflicts raging across the region. The dangers of a wider conflict brought about by President Erdogan’s aggressive foreign policy are clearly evident in Turkish military interventions in Syria and Iraq, but also in its involvement in the renewed conflict between Armenia and Azerbaijan over Nagorno-Karabakh, and in Turkey’s conflict with Greece and Cyprus. Action is urgently needed to reverse the descent into regional conflict that is rapidly escalating out of control.

The United States, Europe, NATO, the UN, and all states with influence in Ankara need to exert pressure on Turkey to change course. The conflict has gone on for far too long, and the situation is worsening with no sign of resolution. Talks aimed at achieving peace are the only realistic alternative to a progressively deepening crisis and a widening of the conflict that will draw in more participants.

Peace in Kurdistan has been calling on Turkey to respond to the demands of the Kurds for peace and for talks to be resumed as the only means of resolving the stalemate and bringing this historic conflict to a conclusion. Ocalan should have a place at any negotiating table.

Peace and freedom are well within the grasp of the Kurds. Freedom for Ocalan; Peace for Kurdistan.