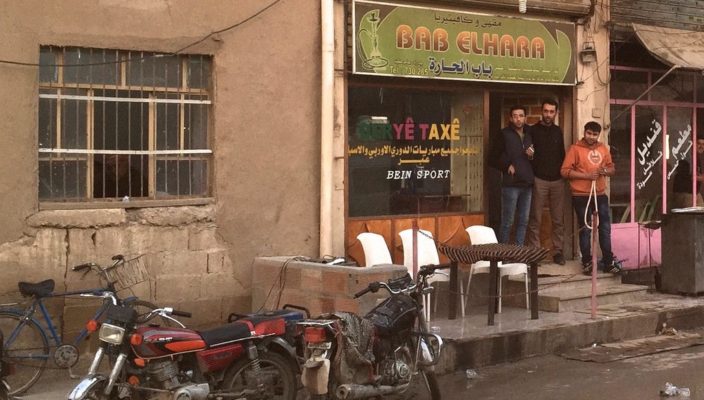 On January 27th, exactly four years ago, the city of Kobane in northern Syria was freed from the hands of the gangs of the so-called Islamic State after months of fierce fighting by the courageous fighters of the YPJ and YPG. At that time, we poured onto the streets in our millions, day after day, week after week, to express our solidarity with the Kobane resistance and to compel the world to act. Nonstop, powerful actions outside the Middle East gave the comrades fighting in the city courage to continue and forced the international powers to act.

The weeks of resistance in Kobane became a symbol of the will, power and hope brought into the world by the young Rojava revolution. Through this resistance, Rojava’s principles of direct democracy, an ecological and collective economy, and the liberation of women became known around the world. Kobane has become a symbol of international solidarity and common struggle – our solidarity across borders and ideological differences, as democrats, socialists, feminists and eco-activists. Countless emancipatory forces united their voices in defense of Kobane. And so, the revolution in Rojava has become an inseparable part of the history of these forces all over the world.

For four years we have gone through ups and downs together, shared successes and losses, grief, suffering, anger, pain and joy. We have seen how the darkness of IS barbarism has been driven out of Manbij and Raqqa, and witnessed the building of a completely new social order. Today, after many years of tough struggle, the Democratic Federation of Northeast Syria has been proclaimed, one-third of Syria has been liberated and the Islamic State is on the verge of complete defeat.

However, during this time we also witnessed the invasion of Afrin by the fascist Turkish army and its Islamist mercenaries and faced the deadly silence of the world community over the occupiers’ crimes. We have lost many valuable friends along the way and yet never given up our courage.

Despite many difficult challenges, we did not let ourselves become divided. We have always stood shoulder to shoulder together, learning, building a new society and defending this revolution together. We have constantly emphasized that democratic, feminist, socialist and ecological forces are our only allies in the struggle for a different world. And in the defense of Kobane, the liberation of Raqqa, and the resistance of Afrin, our isolated voices have become a common call for another world. Together we have grown into an indispensable force that the rulers of the world can no longer ignore.

Today, almost a year after the beginning of the fascist Turkish state’s fierce war of aggression against Afrin, almost four years after the liberation of Kobane from IS, the revolution faces perhaps its greatest challenge yet. The fascist AKP / MHP regime under Erdogan has again declared war on Rojava. Their words are clear and leave no room for doubt: the revolution must be destroyed once and for all. And in the campaign for public opinion, in the media and behind closed doors where regional and imperialist powers are negotiating the future of the peoples of northeastern Syria, this war has long since begun.

In these negotiations we hear the voices of the rulers, talking over the heads of the people of Syria and Rojava. They are concerned only with the redistribution of Syria’s wealth and land. Cities such as Idlib and Manbij, whole regions and peoples: all are carved up and traded for one another by the imperialist powers. The people themselves have no voice in this process. Yet it will be they alone who end up suffering when the Islamist gangs of Turkey get the green light to invade, to murder and plunder. And if Russia and the US allow the airspace of the Turkish Air Force be opened for extensive bombardments, it will be they alone who die.

Despite the inception of ethnic cleansing, the settlement of Islamists in Rojava, and gross violations of international law, the Western world is silent once again. And what should these states be expected to say, if their tanks, airplanes, helicopters, drones and assault rifle sales do skyrocket thanks to another war in Turkey? We know only too well that we can expect nothing from them. To these states, war, death and destruction mean nothing but profit. It was they who provided Turkey with arms to turn against its own population for decades. And they were the ones who made the war against Afrin possible.

This reality has not changed to this day. Despite superficial distortions in bilateral relations between individual states, international support for the Erdogan regime continues unabated. Without the red carpets for Erdogan, financial aid, arm deliveries and secret service cooperation in the fight against the democratic opposition in Turkey, Turkish fascism could not survive a single day more. But so long as the money continues to flow freely, human rights, peace and freedom are in scarce supply. To trust the humanity of the ruling powers in this situation is nothing short of madness. And so we do not want to waste our breath calling on these powers to intervene.

Our call is to all those who dream together with us of another world and are ready to fight for them. We address all revolutionaries, all those who regard themselves as democrats, anti-fascists, feminists, all those who stand up for an ecological future. If we don’t do it, nobody will. By defending the Rojava revolution together, we defend all our hopes. And that’s why, in the spirit of liberation of Kobane, the World Kobane and World Afrin Days, we call for:

* Let’s come together and protest on the streets to send a clear signal of our solidarity with the revolution in Northeast Syria on 27 January. Let us remember together the resistance and liberation of the city of Kobane.

* Let’s use determined and creative actions of civil disobedience to interrupt the production and export of arms, and the daily life of the political parties responsible for the deals with the Turkish regime on 28 January. Let’s make visible the identities of those who benefit from the war, those who finance and drive it.

Let us stand shoulder to shoulder against fascism!

The revolution in Rojava will be victorious! Fascism will be crushed!

To sign the call with your name, please send an e.mail to us

By Janet Biehl – Some Rights Reserved