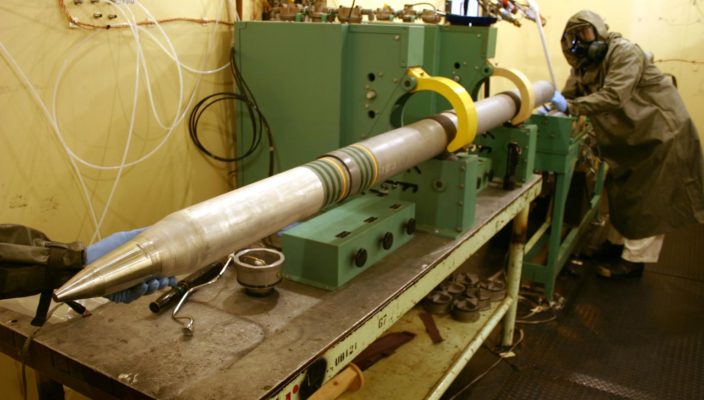 The explosion that took place in Idlib last April 4th has been followed 48 hours later by a missiles strike of United States, with 59 Tomahawk missiles sent to the Syrian aerial base

In OPCW statement available below of April 19th, 2017 we read the following sentence: “Director-General Üzümcü stated clearly: “The results of these analyses from four OPCW designated laboratories indicate exposure to Sarin or a Sarin-like substance. While further details of the laboratory analyses will follow, the analytical results already obtained are incontrovertible.”

“6.3 Based on the evidence presented by the National Authority of the Syrian Arab Republic, the medical records that were reviewed, the results of the sample analyses, and the prevailing narrative of all of the interviews, the FFM cannot confidently determine whether or not a specific chemical was used as a weapon in the investigated incident. From the results of the analyses of the samples, the FFM is of the opinion that none of the chemicals identified are likely to be the cause of death of the casualties in the reported incident“. We kindly refer the reader to the time taken by OCPW to make a in-depth investigation in the case of the event of August 2016, to be compared with the statement made by OCPW a few weeks after the event of April 4th in Idlib.

The explosion that took place in Idlib last April 4th has been followed 48 hours later by a missiles strike of United States, with 59 Tomahawk missiles sent to the Syrian aerial base to which, in accordance to United States intelligence report (see full text), the alleged “chemical weapon attack” has been carried out by Syrian airforces. This strike constitutes a clear violation of United Nations Charter, as no military action can be taken without prior approval of UN Security Council. See on this particular point the analysis published by Professor Marko Milanovic (University of Nottingham) entitled: “The Clearly Illegal US Missile Strike in Syria” published by EJIL-Talk.

A well known scientist from MIT (Massachusetts), Theodor Postol has analyzed the intelligence report issued by United States, and has expressed some doubts about its thesis and conclusions on the direct responsibility of Syria (see Postol´analysis published by GlobalResearch in which we read that:

“We again have a situation where the White House has issued an obviously false, misleading and amateurish intelligence report“.

In an Addendum dated April 13th (see full text), the scientist concludes his complementary analyse writing that: “I therefore conclude that there needs to be a comprehensive investigation of these events that have either misled people in the White House, or worse yet, been perpetrated by people seeking to force decisions that were not justified by the cited intelligence. This is a serious matter and should not be allowed to continue“.

Syrian officials have stated since April 4th 2017 that they have no responsibility in the events that took place in Idlib and that no chemical weapons are used by Syria army since their complete destruction in 2014 (see Syrian representative´s statement at Security Council session, S/PV.7921 of last April 12, pp. 17-20). Early, Israel Defense Minister affirmed been “100% certain” that Syria top authorities were directly involved in the events of April 4th (see note of Haaretz).

While France, United States and United Kingdom have accused Syria to use chemical weapons against rebels group in Idlib (see the official statement made by their representative at the same session of April 12), Russia has asked for an immediate investigation in situ to clarify the exact origin of the chemical substances found in Idlib. On April 5th, three drafts resolution have circulated among the Members of the UN Security Council: see Document 1 (Russia´s draft), Document 2 (E-10 draft) and Document 3 (P-3 draft) reproduced at the end of our note entitled: “Chemical weapons in Syria and UN Security Council: no resolution adopted. Would you like to know why?“.

On the results announced by OPCW concerning Sarin presence in Idlib, Russia top officials have made a few questions related to the physical absence of an investigation team in Idlib: “According to Konashenkov, “in the past two weeks, not a single OPCW representative was seen there.” “Where do these samples come from? Who of the OPCW members was able to study them so fast while standard procedures stipulate a complex research which requires time, as we can see in the case of mustard gas use in Aleppo,” Konashenkov said” (see press note of TASS). A proposal of Russia to facilitate to OPCW full access to Idlib has been rejected by OPCW on April 20th. In his statement after the vote that took place at OPCW, Russia said that: “The proposal that we put forward in conjunction with Iran on the immediate start of a full-fledged investigation into the circumstances of the incident with the use of chemical agents in the Syrian province of Idlib on April 4 was not supported by the required number of votes. In particular, the states from the Western group opposed this draft decision. We are all the more disappointed by this since the Russian delegation, mindful of the instructions issued by a number of colleagues from other regional groups, was looking, until the last minute, for an opportunity to reach a compromise“. (see Russia declaration of April 20).

At the end of this note is reproduced an official press release of Russia Ministry of Foreign Affairs (MFA) on this vote that took place last April 20 in The Hague, poorly reported by international media.

The Convention for the Prohibition of Chemical Weapons adopted in 1997 has been ratified by 192 States, including Syria (in 2013). The only State that has not ratified this international treaty is Israel (see official list of signatures and ratifications).

THE HAGUE, Netherlands — 19 April 2017 — The Executive Council of the Organisation for the Prohibition of Chemical Weapons (OPCW) reconvened today to further address the allegation of chemical weapons use in the Khan Sheikhun area of southern Idlib in the Syrian Arab Republic. OPCW’s Director-General, Ambassador Ahmet Üzümcü updated Council members on recent developments regarding the OPCW Technical Secretariat’s activities.

Ambassador Üzümcü underscored that the Fact-Finding Mission (FFM) continues its work using procedures and methodologies consistent with its mission and reaffirmed that the FFM has been endorsed by the relevant decisions of the Executive Council and applicable resolutions of the UN Security Council. He reiterated his full confidence in the professionalism and impartiality of colleagues comprising the Fact-Finding Mission teams.

The bio-medical samples collected from three victims during their autopsy were analysed at two OPCW designated laboratories. The results of the analysis indicate that the victims were exposed to Sarin or a Sarin-like substance. Bio-medical samples from seven individuals undergoing treatment at hospitals were also analysed in two other OPCW designated laboratories. Similarly, the results of these analyses indicate exposure to Sarin or a Sarin-like substance.

Director-General Üzümcü stated clearly: “The results of these analyses from four OPCW designated laboratories indicate exposure to Sarin or a Sarin-like substance. While further details of the laboratory analyses will follow, the analytical results already obtained are incontrovertible.”

In the meantime, the Fact-Finding Mission is continuing with interviews, evidence management and sample acquisition. The Director-General reported that an FFM team is ready to deploy to Khan Sheikhun should the security situation permit. He reminded the Executive Council of the 27 May 2014 attack on an FFM team and the action the Council subsequently took in emphasising the importance of safety and security of OPCW experts deployed to Syria.

The FFM is still anticipated to complete a first report of its findings to be submitted to States Parties of the Chemical Weapons Convention within two weeks and the Director-General will make the report available to the OPCW-UN Joint Investigative Mechanism. Ambassador Üzümcü repeated his request for the continued support of all States Parties, including through the provision of relevant information, to ensure that the Technical Secretariat is able to pursue its work, and to allow it to fulfil the OPCW mission within a reasonable time frame.

The Executive Council decided to reconvene tomorrow, 20 April, to vote on a draft decision under discussion.

The outcome of today’s vote at a special session of the Organisation for the Prohibition of Chemical Weapons (OPCW) Executive Council shows that the Western group of countries and some of the states that joined it are not interested in establishing the truth. They failed to demonstrate their willingness to take the only right step in this situation, specifically, to send a team of investigators to the scene of the chemical incident in Khan Sheikhun and to the Al-Shayrat air base, from which the alleged “chemical attack” was supposedly carried out, as they claim. Those countries continue to stick to their line, disregarding any argument, and continue to impose on the international community the same pseudo conclusions that they pushed on the UN Security Council.

They do not need the truth. For them, everything has been settled: Damascus is to blame, according to them, and Moscow, they say, is just obscuring the matter, preventing the OPCW from doing its job.

However, without collecting evidence at the location and establishing the facts, all their accusations against the legitimate government of Syria remain groundless. The West always has its own “pocket” specialists on hand, who are ready to write any report at the first signal and fit pseudo evidence into pre-formulated conclusions. Today, our diplomats in The Hague and the Russian Defence Ministry’s official representative talked about this amply and convincingly.

And we strongly condemn the irresponsible stance of those that voted against it. The Western group has once again revealed the essence of its destructive approach.

These countries caused serious damage to the reputation and authority of the OPCW. By disrupting this badly needed process, they have again complicated the search for a way out of the Syrian crisis.