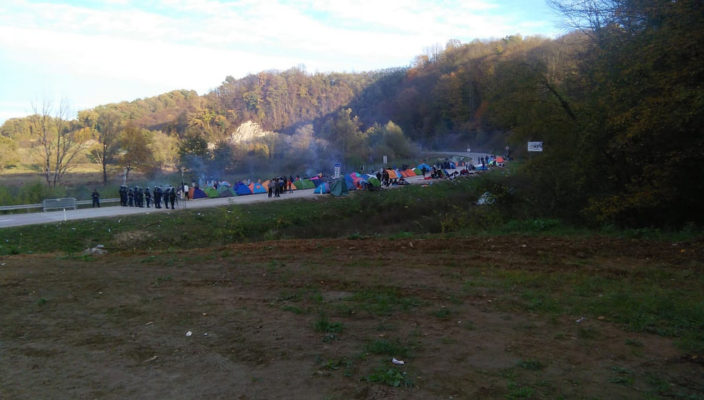 Bihac, on the border of Europe – Part Two

A delegation from Pordenone, led by social cooperative Noncello, has traveled to Bihac, Bosnia, to monitor the situation of refugees on a route which is not on the media spotlight

The movement of the people around us is incessant, men for the most part. “From 9 to 11 we distribute breakfast”.

There is only one woman, whom I discover to be Iranian, with her husband, an adolescent son and another only a few years old. They are a Christian family and for this they escaped.

“Two years ago we left our country and for seven months we have been here. Crossing the border will be difficult, with the child I mean”.

Mentally, while we are leaving, I review all those who have already crossed … Mothers with children, women victims of violence and unaccompanied minors, who declare themselves, are welcomed in the former Sedra hotel in the canton of Cazin, again on the border, between Bihac and Velika Kladusa.

“The Sedra is managed by the OIM” explains Greta Mangiacalli, a young exponent of Ipsia Acli, who came to Bihac to follow a project on the environment and found herself involved in the refugee emergency.

“A total of 400 places now almost all occupied. Family units continue to arrive and we need to find other suitable housing solutions. Some women, however, prefer not to separate from their husbands and stay here”.

Through a ladder we move to the top and turn around the building. In an Indian row in what is a slippery ground in the ever-sparse grass, men of different nationalities move between the building and the neighboring tents, placed on the ground in descent.

“There are mainly Pakistanis, Iranians, Afghans and Iraqis. There are still few Syrians but they are coming. Both the building spaces and the tents have been divided into zones”. Salam stops in front of a large white tent.

“There were tensions and fights between the various national groups to which they belong. No problem with the local citizens, instead”.

As we descend moving between the trees that scatter the hill, passing next to a billboard that shows the different paths for trekking in different colors, I ask if they know how many people there are between those in tents and those in the building.

“About 300 in the field tents, all men. Between 800 and a thousand in the building. But, according to us, the most realistic number of migrants moving in the area to the border is about 6 thousand”.

We are back at the parking lot. Groups of refugees, scarves or hoods on their heads, and bags on their shoulders, are moving away from the camp.

They are bound to the border, today they will try their luck.

We follow them with our eyes, some ask for confirmation. “Every day there are between 100 and 150 people leaving, divided into different groups” translates Hazra.

“For some of them this will be the tenth time. I saw several of them hurt, we even treated them”. Knowing that they would then try again. “This is also why it is so difficult to have an exact estimate, to make a census. Many have spent up to two years in Serbia, children speak the language by now”.

Bihac is a border town.

There is not yet the barbed wire to mark it, on the other hand there is the active Croatian police to mark it with aggressive and violent methods.

They act as a watchdog for Europe, thanks to the funds provided by Frontex, the European Union agency guarding the sea and land borders. Funds rained in the boxes of the Republic of Croatia.

In the land of Bosnia and especially in this city you can actually touch the contradictions that tear apart Europe and what seems unquestionable is precisely the question of the borders that our sovereign and/or coward governments want to make more impassable than the real walls that delimit other states, such as Israel from Palestine, Turkey from Rojava.

By unloading on the nations of a politically fragile and socially torn region like the Balkans, the tensions of a war fought by proxy: that unleashed against refugees and asylum seekers.

(Part One can be read here)