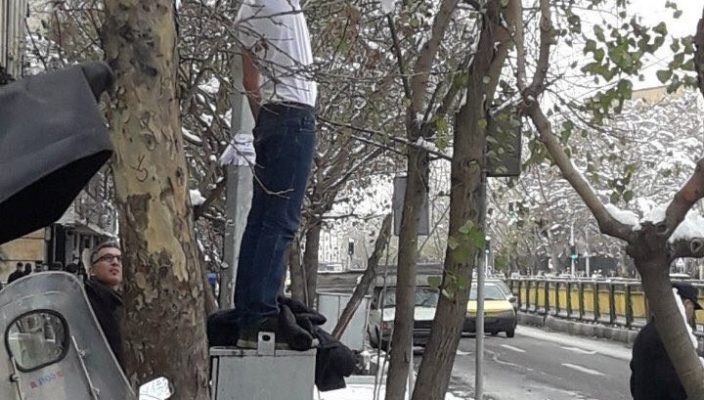 “It should not be forgotten that what little freedom the students have in this university in terms of their clothing is not because of the kindness of officials and administrators but achieved through nonstop resistance and perseverance by students to gain their inalienable rights… Students reserve the right to confront such actions, defend their basic rights, and prevent anyone from undermining their dignity any longer…” (Teheran University students, May 13 Statement)

This week saw more confrontation in Iran when students in Tehran organized a protest against the regime’s insistence that women wear mandatory headscarves in public and the intensified policing on campus as part of the religious holiday of Ramadan.

The headscarf, or hijab, is now mandatory in public for all women in Iran.

“In 1985, it became mandatory for women to wear the hijab with a law that forced all women in Iran, regardless of their religion. The hijab became a tool for implementing the government’s strict religious ideology.” (Moujan Mirdamadi)

Those who violate the rule are usually sentenced to a prison term or fined. “Article 638 of Iran’s Islamic Penal Code states, ‘Women who appear in public places and roads without wearing an Islamic hijab shall be sentenced to ten days to two months imprisonment or a fine of 50 thousand to five hundred rials.’”  (CHRI)

A symbol of oppression

“The new law marked an ideological way of governing that continues today. The compulsory hijab law has been used to exclude women from various areas of public life, either by explicitly banning women from certain public spaces such as some sports stadiums, or by adding restrictions on their education and workplace etiquette. More generally, it is also used to exclude anyone who disagrees with the ideology of the regime, who are branded as having “bad-hijab”. Not adhering to hijab continues to be seen as a hallmark of opposition to the government.

“The law is also used to justify the regime’s increasing involvement in citizens’ private lives. From an early age, girls are forced to wear headscarves in school and public places. Teenagers and young people in Iran are routinely stopped by the “morality police” responsible primarily for policing people’s appearances and adherence to wearing the hijab.”

With the month of Ramadan beginning on the evening of Sunday, May 5th, protests were soon to break out in the university in reaction to the increased policing of the “Hijab and Chastity” campaign. The presence of police and vigilante groups also created tension among the students.

“Posts by students on social media reported that pressures on female students have been redoubled during recent days as the beginning of Ramadan coincided with the start of an early summer weather. Both occasions usually trigger vigilante groups to campaigns for strict Islamic dress code.”  U.S. funded Radio Farda said.

The Iranian morality police – Gasht-e Ershad (Persian for Guidance Patrols) were formed during a crackdown on “un-Islamic” dress in 2007,  and along with the Basij militia – (“The Basij volunteer force operates under the Iranian military’s Islamic Revolutionary Guard Corps (IRGC). Its members are often seen harassing and beating people at public protests.” CHRI) – increase their public patrols during Ramadan to ensure that women do not violate hijab rules as well as guarding against violations on the prohibition against eating during daylights hours.

Their job is to enforce Iran’s Islamic code of conduct in public, usually doing so by confronting and challenging (intimidating?) “suspects”, imposing fines and until recently arresting members of the public.

“They are mainly seen as a scourge for urban women – usually from wealthier social groups – who try to push the boundaries of the dress code… This includes wearing the headscarf as far back on the head as possible, or by wearing looser clothing, especially in the heat of summer, although men sporting “Western” hairstyles are also at risk…. Fear of encountering them has even prompted the creation of Android app that helps people avoid Gasht-e Ershad mobile checkpoints.” (BBC)

Following sustained protests against the policies of the regime, including forced wearing of the hijab, in 2017 and 2018 which spread to over 80 cities in Iran, earlier this April attempts were made to rein in the university students following the passage of an amendment to the Islamic Republic’s academic disciplinary regulations.

“University students in Iran could be punished for engaging in online activities deemed by the government as “unethical” ‘Publishing unethical photos or committing immoral acts in cyberspace and on information-sharing networks will result in disciplinary action against students,’ said Jamasb Nozari, director of the state-run Academic Affairs Organization, in an interview with the state-funded Iranian Students News Agency (ISNA) on April 26, 2019.”

These protests targeted, particularly in January 2018, Iran’s mandatory hijab law, with women, “standing on utility boxes in public places, taking off their headscarves and holding them up as flags. Some men also supported the women in the protests.” (Cover photo) Following these protests over 150 university students were estimated to have been  arrested. Following this the CHRI tells us “…In August 2018, 22 university students were issued heavy prison sentences under “national security” charges for allegedly attending the protests.”

The Centre for Human Rights in Iran:

Now following the recent protests in Teheran University against enforcement on the campus of  the “Hijab and Chastity Program” the Centre for Human Rights in Iran writes:

“Members of Iran’s paramilitary Basij force violently attacked several students at a peaceful protest at the University of Tehran on May 13, 2019.

“The demonstrators had gathered to protest the increased presence of so-called “guidance” units charged by the government to enforce strict observance of Iran’s compulsory hijab law at the campus.

“The protesters chanted slogans including “students would rather die than be humiliated,” “unemployment, slavery, women’s hijab compulsory,” and “reformists, conservatives, the game is over”.”

“Images and video clips shared on social media showed students being physically assaulted by Basijis and other plainclothes agents.

“Forcing and compelling a certain kind of clothing on students is a flagrant affront against their privacy, a blatant violation of their human rights, and an outright injustice toward female students,” said a statement published by the National Council of Student Guilds’ (NCSG) Telegram app channel on May 13.”

All of which should remind us of

Nasrin Sotoudeh, the leading Iranian human rights lawyer, who, alongside many others who have stood up to the regime, is beginning to serve her 38 year prison sentence (along with being sentenced to 148 lashes) because of her work, including that of courageousluy defending women’s rights and protesting against the country’s forced hijab laws.

“The Islamic Republic is going through one of its worst crises in the past 40 years. They have lost many of their supporters in the last nine years. Poverty is growing, and the vast corruption within the system cannot be hidden anymore. Dissatisfaction among people is increasing. Protests are not any longer limited to the intellectuals and the urban middle class: workers, teachers, students, women, and many other groups are daily challenging the authority of the establishment. The Islamic Republic is struggling for its survival. In a situation like this, anyone with the potential of leading the change is regarded as a significant threat by the authorities. Nasrin Sotoudeh is such a person. She is courageous, can communicate with the ordinary people, stands for the fundamental human rights, has not left the country despite several years of pressure, persecution and harassment, and she is a woman. Nasrin Sotoudeh has all it takes to become a leader. I think the recent sentences against Nasrin must be seen in light of these circumstances. It is a panicked attempt to silence an emerging leader and to send a signal to anyone with the potential of leading a change.”

Meanwhile, while the regime beats and imprisons its citizens at home…

Across the border in Syria

The Syrian Observatory for Human Rights tells us Iran continues its operations in Syria, both in the south of this war-torn country, as well as west of the Euphrates River recruiting “in exchange for money and playing on the religious and sectarian manners” almost 2000 paramilitaries to their Shiite militias (to add to the estimated 30,000 combatants they currently field) –

“…networks of godfathers and agents who are secretly and openly actively bringing in more men and youth drawn by material gain, where they exploit the poor living conditions and the religious and sectarian divide, and as more men and youth are recruited, rising to about 1,710, the number of Syrian men and young men of different ages who have been recruited in the ranks of the Iranian forces and their militias recently after “Shiite” operations in the west Euphrates area in the Deir Ezzor countryside…”

…continuing to ‘militarise’, destabilize and punish an already traumatised country which is now apparently being dissected – “the Syrian regime remains powerless, and everybody knows that its existence is only a formality and cannot impose its influence and decision on any geographical spot in Syria” [SOHR] –  like a corpse on a table…

As if the Islamic Republic of Iran did not have enough to be getting on with, at home, across the border, in Iran itself..?

“What Iranian society is most in need of is hope”

“The hijab has once again become a symbol, this time of the ideology and power of a regime over its people. By protesting this notion, Iranians are drawing a boundary for the government: individuals have the right to their body and their appearance and this is not a matter for the governing regime to enforce.

“What Iranian society is most in need of is hope – not only as a driving force for active participation of citizens, but also as a unifying force bringing together different factions of the society. The protest against the hijab is symbolic. But it is also a protest with a clear demand, and with the potential to bring together Iranians, regardless of gender or religious beliefs. It could be just what Iranian society needs to restore hope for the future, and more importantly, for change.”

…And so it seems that while capitalism unfolds its profit-driven consumer-creating “war-without-bullets” across a planet we are beginning to recognise it is about to destroy, competing ideologies seek to secure their place in the scheme of things through waging jihad and beating unarmed students off the streets in the unholy recognition that for society to progress we, apparently, are only able to do so through wading through the mud of centuries of ignorance, darkness and superstition; either that, or have the equally destructive and less-than-rational rhetoric of a Trump shoved down our throats.

Time to find a path through these competing insanities….

Short clip of assault on Telegram