The list of outrages perpetrated by the Turkish republic, under the authoritarian rule of Turkish President Erdoğan in recent years seem endless. The enormous silence surrounding these criminal acts is equally outrageous

“The bloody Turkish state is waging a genocidal war against the Kurdish people, using economic and political resources. It has massacred civilians; women, children or the elderly indiscriminately. Turkey does not abstain from using all kinds of weapons and chemical weapons in the ethnic cleansing massacres.” The European Kurdish Democratic Societies Congress (KCDK-E)

The list of outrages perpetrated by the Turkish republic, under the authoritarian rule of Turkish President (and Chairman of the ruling Justice and Development Party/AKP) Recep Tayyip Erdoğan in recent years seem endless.

The enormous silence surrounding these criminal acts is equally outrageous.

It might be unkind (if judicious) to remind the world of the genocides perpetrated by the dying Ottoman Empire which laid the foundations for the modern Turkish state but there seems little need, witnessing the recent violence perpetrated against relatively defenceless civilian populations in northern Kurdistan (south east Turkey) and now in north eastern Syria / Rojava …

Turkey’s key strategic links to NATO and the USA are obviously one explanation for the profound silence when mass murder and crimes against humanity are arrogantly and wantonly perpetrated on an increasingly regular basis.

You may also wonder if the Trumps’ business  empire, with its Turkish assets, might also be a factor in decisions that appear to encourage the Turkish president in his increasingly aggressive behavior, both internally against his own people – and externally, where he now ruthlessly employs a policy of burnt earth and cruelty against any he perceives as a threat: usually the Kurds and other minorities not known to be enthusiastic supporters of the Ottoman (now Neo-Ottoman) Empire. Like the Trumps, it appears the Erdoğan family likewise seems to be smart enough to turn a tidy profit out of war and suffering.

Now with the plague of coronavirus waging its ruthless passage across human societies one would think that matters of war would be put on the back burner for better days… not so it seems when it comes to Turkey and its militant Islamist paramilitaries in the areas they operate and usually bring destruction to.

With all this in mind and facing the immeasurable frustration, sorrow and anger of those witnessing the events of recent years, and with little hope, at present, of the Turkish regime changing its belligerent stance, the importance of the BOYCOTT TURKEY campaign becomes apparent.

“Turkish goods sold abroad and tourism provide the greater share of these economic opportunities. Millions of euros made in these ways are used to shed Kurdish blood. Obviously, the greatest source of the Turkish state’s ability to continue the genocidal war against the Kurds, constituted by the economic strength, are gained from goods sold abroad and tourism revenues.” (November 2019)

With few voices raised internationally against the many players bringing death and misery to Kurds and Syrians in the region, it seems there are few opportunities left to confront these powerful forces; and so:

“Boycotting Turkey is not merely an attempt to economically disrupt a billion-dollar business empire that profits from massacre, authoritarianism and intimidation. It is also an ethical stance against the exploitation, terrorization and annihilation of the Kurdish people and other communities, targeted by the nationalist state mentality of Turkey. Boycotting Turkey means saying NO to the normalization and white-washing of dictatorship and genocidal politics.” Dilar Dirik, Kurdish academic and activist…

The word boycott was born during the Irish “Land War” in the 1880’s when Captain Charles Boycott, the land agent of an absentee English landlord (Lord Erne), began to evict protesting tenants in the west of Ireland from their land. Captain Boycott quickly became completely isolated – no one would associate with him, work for him, nor deliver to him and he became completely shunned in the area. The boycott being successful, Captain Boycott’s predicament came to national and international attention, giving birth to the word, and was one of the early non-violent protests against the arrogance of power backed by military violence.

Likewise the non-violent Montgomery Bus Boycott from December 5, 1955, to December 20, 1956,  in Alabama began four days after, Rosa Parks, an African American woman, was arrested and fined for refusing to give up her bus seat to a white man, sparking the widespread civil rights campaign against segregation in the US.

The Anti-Apartheid Movement in Britain also began to expand after the Sharpeville massacre was perpetrated on 21 March 1960, where 69 unarmed protesters were shot dead by South African police, continuing an already existing consumer boycott and now campaigning for the total isolation of apartheid South Africa, including economic sanctions. “The campaigns from the 1960s to the 1990s raised global awareness of racist Apartheid.”

Drawing on the  international Anti-Apartheid Movement, the Palestinian BDS Movement to boycott Israeli goods and cultural products began in 2005. The Boycott, Divestment and Sanctions campaign against Israel brought together a number of individual boycotts of all Israeli institutions and now works to direct press and public attention to the plight of the Palestinian people.

Now this fledgling campaign – against the Turkey of Recep Tayyip Erdoğan – is designed to target Turkey’s key exports and imports, including tourism, in order to encourage the current AKP regime to understand that the world will no longer continue to stand by silently and allow outrages and crimes against humanity to continue with impunity…

In 1946, Eleanor Roosevelt was selected to chair the Universal Declaration of Human Rights Drafting Committee, commissioned to write the articles of the Declaration over the course of two years. After the horror of the fascist death camps in World War 2, the Universal Declaration was an attempt to give voice to a profound hope for the basic rights of all individuals to be respected in all circumstances.  Despite its too-many weaknesses, the Declaration still stands as a statement that in our new globalised world no state nor would-be-empire can do just as it pleases because of its military technology or its political dlominance.   The Declaration asserts that silence, silence in the face of cruelty and barbarism, should be a thing if the past .

If we are now to have a world order that protect the rights of property along with the profits of capitalism then we may as well have a world order that protects the life, safety and rights of individuals, hopefully as a prelude to a world where peace and the radical changes we need to sustain our small planet will be based on a profound respect for all: all people, everything that lives, and the environment that sustains life.

With this in mind, the BOYCOTT TURKEY campaign has to be an important, if not crucial, contribution to this work of transformation as well as “saying NO to the normalization and white-washing of dictatorship and genocidal politics.”  When rogue states and dictators are confronted in their cruelty, criticised and shunned by all and not allowed to continue their aggression and contempt for human life, we can begin to put an end to the path of war and destruction.

Don’t fly with Turkish Airlines, which is half-owned by the Turkish State…

E.g. Beko, Grundig (since 2007), Ford (Ford Otosan is a joint venture between Ford and Koç, the largest holding company in Turkey.) You can boycott specific Turkish brands…

Follow the action taken by the shopkeepers in Iraq’s Kurdish region who began to boycott Turkish goods in protest at Turkey’s latest incursion into Kurdish Syria. “From pomegranates to plastic buckets, yoghurt and beauty products, Iraq imports more than $8 billion worth of Turkish goods a year through its autonomous Kurdish north.” (France 24)

Oh, and while we are at it, maybe we could tell the international arms dealers, that they also should stop selling their weapons of pain and death to a state like Turkey who knows only too well how to share pain and death with its own citizens at home  and its many perceived enemies abroad… Stop Arming Turkey!

In addition, the UK’s Boycott Turkey campaign specifically asks us to:

Take action against the Turkish and international companies selling weapons to the Turkish state.

Pressure governments to end all military cooperation with the Turkish state, including the issuing of export licenses to Turkey.

Campaign for the immediate imposition of a complete international arms embargo against the Turkish state, including so-called “dual-use technology”.

Don’t holiday in Turkey: “To put it bluntly: the more tourists enjoy Turkey’s beaches, the more Kurds will die.”

Call on all musicians, artists, sports people, philosophers or any other cultural personalities or workers, to refuse to participate in Turkey.

“If you read the Turkish warmongering newspapers, watch Turkish TVs, if you send money to Turkey, if you market Turkish goods, if you buy Turkish goods, if you go to Turkey for vacation, if you do paid military service for the Turkish army, you must know that you’re supporting this war indirectly. By doing this, you support this war and with this support Kurds, Assyrians, Armenians, Arabs, Alevis, Yazidis, Christian, Muslims, women and children are slaughtered.” the European Kurdish Democratic Societies Congress tells us…

“Each penny you spend on the Turkish goods, products and tourism turns into a bullet or into bombs that kill our children in northeastern Syria,” SDF spokesman Mustefa Bali (France24) 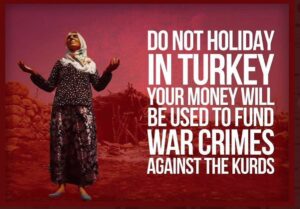 Official account for the UK Boycott Turkey campaign. We are fighting for Boycotts, Divestment and Sanctions against the authoritarian Turkish state.

Former PYD (Democratic Union Party) Co-Chair Salih Muslim calls for action against the supply of drone parts and technology from the UK to the Turkish state. The regime in Turkey is currently waging a brutal and illegal war against Kurds and others in Rojava and across the Mesopotamian region.

“In March 2017, the United Nations accused the Turkish government of “massive destruction, killings and numerous other serious human rights violations” against the ethnic Kurdish minority.”

Where is my mother tongue? Nurcan Baysal

“For 79 days, the people of Cizre witnessed an exceptional massacre in history. For the sake of a humane and free life, they lost their daughters and sons during the resistance. Yet they have not surrendered, and have not asked for mercy.” April 17, 2016, Peoples’ Democratic Party (HDP)