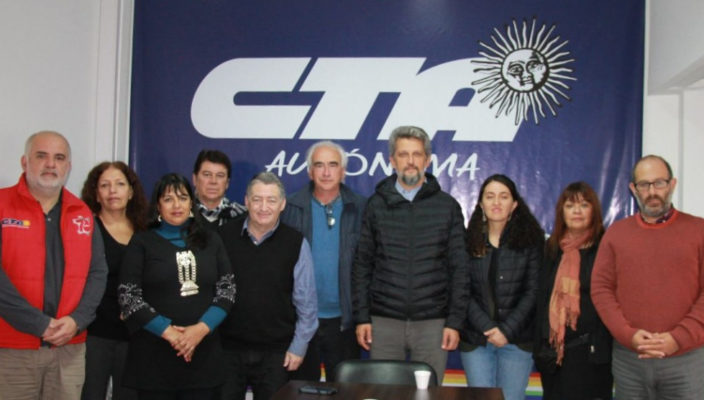 HDP deputies Ebru Gunay and Gato Paylan continued to meet with different sectors in Argentina talking about the issues of human rights violations in Turkey, the current economic and political crisis, the war against the Kurdish people, the struggle of women, the situation of workers and workers solidarity ties between the struggles of Argentina and the people of Turkey.

Ricardo Peidro, Secretary General of the Autonomous CTA, welcomed the HDP parliamentarians and talked about the function and birth of the union organization: “The Central of Workers was founded in 1990 and our function is not only with salaried workers, but also with precarious and unemployed workers. We have an internationalist policy and therefore we are very pleased to host the two friends from the HDP here.”

Ebru Gunay said: “The union struggle in Argentina was always an example, we see that this struggle is very necessary today in Argentina. As HDP we are working for women’s rights, in all areas of life, also in the areas of work, including work in the house. We are in a situation of war inside Turkey, currently we are facing a strong political and economic crisis, and this makes it difficult for workers to work. We want to create an international front and solidarity between the workers. This is our first visit and we hope to continue this relationship.”

HDP parliamentarian Garo Paylan said: “I am in the area of economics in parliament but on the agenda it is never the main issue, because every day there are human rights violations in Turkey. Thousands of workers, academics, lawyers, journalists are in prisons, the government tried to silence the people four years after a peace process between the Kurdish people and the Turkish government and today the situation is tougher.They steal people’s money and buy weapons to bomb the Kurdish people. They talk about the security threat, and they use that as an excuse, but if we can’t solve the issue of democratization in Turkey we can’t start discussing the workers’ situation and the economic situation.”

Paylan also added: “We are very concerned about the Turkish soldiers deployed on the border with Syria. As a son of a massacred people I am worried that a genocide may happen again. Turkey does not talk to the people in Syria, it talks to Putin and Trump who are not Interested in human rights. That’s why we have to raise our voice.”

Finally Paylan said: “First of all we have to avoid war and not use the money of the poor for war. It is important to obtain a call from governments to oppose this war and this genocide that happens in Turkey.”