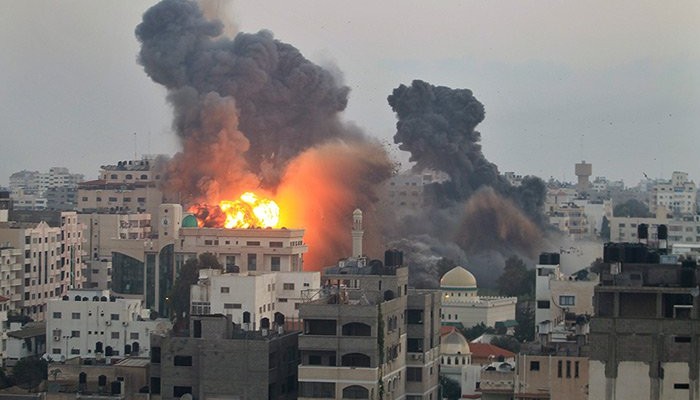 The First Refugee Centre, Diary from Gaza by Abdallah Tayeh

Without warning the war starts, and by chance my house happens to be a couple of streets away from the first refugee centre set up for those whose homes have been destroyed in the border areas

Without warning the war starts, and by chance my house happens to be a couple of streets away from the first refugee centre set up for those whose homes have been destroyed in the border areas. This centre, like so many that pop over in the next few days, is located in one of the schools that the United Nations established in Gaza, under the auspices of their relief agency, UNRWA.
I do not leave my house during the long hours of bombardment.
Although there’s little logic to me staying put. Israeli shells don’t choose their targets it seems, so there’s as much chance of me being killed in my home as on the street. So how do I know that there’s a refugee centre in my neighbourhood? This is simple story. A few days ago I was awoken by the gentlest knocks at my door. When I open it, I’m greeted by a small girl carrying a bottle of water. She asks if she can put it in my freezer and come back for it later for the iftar (breaking of the fast). I take it from her, and a few minutes after she leaves another child carrying knocks at the door, this time two bottles. It’s at this point that I realise I’m near a refugee centre.
Within a few hours a dozen children have appeared with bottles under their arms, and my freezer is full to bursting. Just before the iftar, they all return to collect what’s theirs.
Does humanity have any conscience at all? How can the West stand by knowing that its children continue to enjoy a quiet, carefree life, whilst ours have to pick their way through rubble, dodge bombs, witness their homes and their families being torn apart, or even go from door to door begging for a chance to have a cold drink of water after a scorching hot day of fasting in July?

Abdallah Tayeh is a founding member and Deputy President of the Palestinian Writers’ Union and Vice President of the Afro-Asian Writers’ Organization in Palestine. His political articles have been published in many Arab publications and he is an editor of the literary magazines El Zawia and Dafater Thagafia. He has published five collections of short stories:
Who Knocks at the Door (1997), The Circles are Orange (1991), Searching is a Continuous Rhythm (1997), Waves Slipping Away
(2001) and Soldiers Who Don’t Like Butterflies (2003),as well as five novels: Those Who Search for the Sun (1979), The Car and the Night (1982),The Prickly Pear Will Ripen Soon (1983),Faces in Hot Water (1996) and The Moon in Beit Daras (2001).