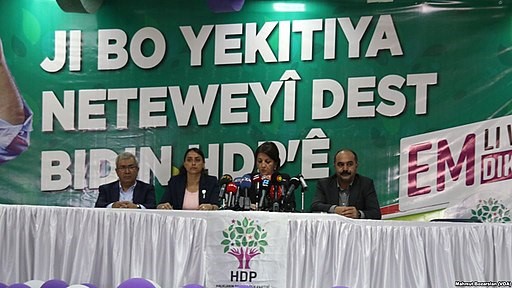 Turkey. Ballot boxes can never be used as the means to legitimize fascism

“We advise those who claim that the HDP is not a political party representing the whole of Turkey to look at these results…what is clear is that Turkey can only move forward by carrying onward its democratic struggle and not by institutionalizing fascism and one-man-rule. Ballot boxes can never be used as the means to legitimize fascism.” Pervin Buldan & Sezai Temelli

We have received the messages of those who voted for the HDP and we will continue our struggle with a political line that will not disappoint them. We have also received messages from those who spared their votes or who hesitated for some reason; we will pursue our efforts to win their hearts and support by eliminating our shortcomings and weaknesses.

And a very special thanks to all the peoples of Turkey, especially the Kurdish people who have not been submissive and said no to persecution and devotedly worked and struggled despite all the difficulties and oppressions.

Compared to the November 2015 elections, our vote share has risen in total 725 thousand votes. In Istanbul and İzmir, it has passed the level reached at the 7 June 2015 when the HDP became the third party. Also in other western cities, the obtained results are either higher than the June 7 or November 1 elections. In Antalya and Kocaeli, where we lost a deputy on 1 November, we compensated our loss and a great success was achieved in Hatay, where we won our first deputy. We advise those who claim that HDP is not a political party representing the whole of Turkey to look at these results.

But we are not going to make an excuse out of these obviously negative circumstances. Despite everything we see the results in this region as our own failure.

We are aware that those votes have been cast not just for the HDP, but for the HDP’s values and its struggle for democracy. HDP voters also clearly support a strong parliamentary regime, strong local democracy, rule of law, an independent and impartial judiciary. The HDP will continue to do its best to be worthy of this endorsement and to shoulder the accumulation of Turkey’s 150 years of the struggle for democracy.

The democratic social opposition must trust itself; by reinforcing solidarity, it must be locked on to new targets without being overwhelmed and withdrawn. The election process has brought out a positive synergy, and nobody has the right to waste it. This motivation can be maintained with the right policies and committed steps. For democratization and to solve the Kurdish problem in Turkey, social democratic opposition forces should combine their powers on the basis of common principles.

The AKP has lost its majority in Parliament by losing more than 2 million votes in both the east and the west of Turkey. The AKP is now forced to exist as a minority government and in coalition. On the other hand, the 16-year AKP rule has in fact created profound social, cultural, urban and ecological destruction. An economic crisis is now only a matter of time. It is very likely that a new belt-tightening package will be imposed on our peoples. The HDP considers fighting against the efforts to burden this heavy weight on the working class as one of its priorities.

In this context, the HDP will take its place at the front line of the democracy block. With its activities and struggle, the HDP has nurtured both courage and hope against the empire of fear that the AKP has been trying to create. The HDP has been the building force and locomotive of democracy and the peace struggle, and will remain so into the future. The HDP is the home of hope, and the assurance of a democratic future.