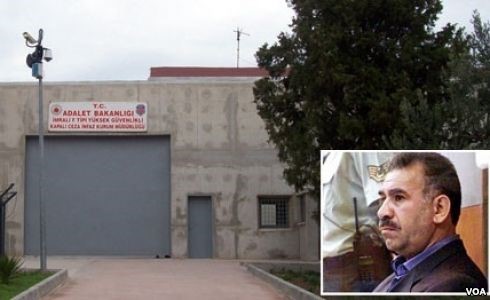 We write to express our deep concern over the UK government’s position in its relations with Turkey as the human rights situation inside the country continues to deteriorate rapidly. In particular, we seek to urgently draw your attention to the 7,000 Kurdish political prisoners on hunger strike in Turkish prisons and the solidarity hunger strikes now spreading across Europe, including in the UK. Seven Kurdish political prisoners in Turkey have taken their own lives in the last three weeks.

The hunger strikers are demanding urgent action to end the persecution of the Kurdish people in Turkey as embodied in the person of Abdullah Ocalan who has been kept in a state of aggravated solitary confinement for approaching 20 years: an inhuman punishment in breach of both domestic laws and international conventions to which Turkey is a signatory.

There has been a lack of tangible and effective action by the Council of Europe and the Committee for the Prevention of Torture (CPT) with respect to Turkey’s continued denial of Ocalan’s basic human right to be visited by his family members and his lawyers. This is despite the fact that in January 2019, the Council of Europe passed a resolution clearly expressing concern regarding the human rights situation in the country and the condition of the hunger strikers, as well as calling on the Turkish Government to authorize immediate publication of the CPT’s findings on Ocalan.

However, this resolution has been insufficient in pressuring Turkey to take any action to mitigate the severity of the isolation conditions, and the situation is now absolutely critical.

As you must know, Abdullah Ocalan was abducted from Nairobi, Kenya, on 15 February 1999 in an international clandestine operation involving the intelligence agencies of Turkey and the US, and has been kept in conditions of harsh solitary confinement virtually ever since; he has been forbidden contacts with a lawyer since 2011, and has only been granted two visits since April 2015.

To protest these unlawful conditions, the then-imprisoned MP of the People’s Democratic Party (HDP), Ms Leyla Güven, started an indefinite hunger strike on 7 November 2018. Since then, more than 7,000 political prisoners across Turkey, and numerous members of the international community in Europe, the UK, North America, and the Middle East, have joined Ms Güven in declaring themselves to be on indefinite hunger strike, with the sole demand of ending the isolation imposed on Ocalan. Many hunger strikers are now reaching a serious point and are suffering serious health problems, but they are refusing medical treatment until Ocalan’s isolation is lifted.

The human rights situation in Turkey has progressively deteriorated since the breakdown in 2015 of talks for a peaceful resolution of the decades-long conflict between Kurds and the Turkish State, at which point Turkey switched towards a policy of brutal repression against its Kurdish population, imposing harsh 24-hour curfews across the south-eastern Kurdistan region and committing countless human rights atrocities.

This situation was greatly exacerbated by the state of emergency which followed the failed coup of July 2016: political opposition, critical media and trade union activity were frequently banned alongside the removal from office of democratically-elected politicians and members of the judiciary on grounds of suspected affiliation with “terrorist activity”. Elected officials have been replaced with individuals loyal to Erdoğan’s AKP party.

The Council of Europe Committee for the Prevention of Torture (CPT) has visited İmralı seven times since 1999. Very few of the improvements they have called for have ever been implemented. The CPT’s last visit to İmralı was on 28-29 April 2016, and Turkey only gave permission for the publication of the report of this visit nearly two years later in March 2018. The hunger strikers also demand that the CPT revisit İmralı Island Prison immediately, which is within the organisation’s capacity.

This demand for help is putting to the test our civilised values. The hunger strikers have put their lives on the line in the belief that the world will listen to them, and that the Council of Europe and the Committee for the Prevention of Torture will act to support the elementary human rights they exist to uphold. The hunger strikers are prepared to take their actions through to the end, but not one of them wants to die; it is simply that they have been pushed so far, they do not see any other political option available to them. We urge you not to let them down, and not fail the fundamental principles on which these institutions were founded.

The UK must fully live up to its obligations and commitments to human rights throughout the world and stand up for decency in international relations.

The key to a peaceful and political solution to the Kurdish Question in Turkey is the transformation in the treatment of the man that millions of Kurds see as their true leader.

If you have any queries about republishing, please email: contact@kurdistantribune.com