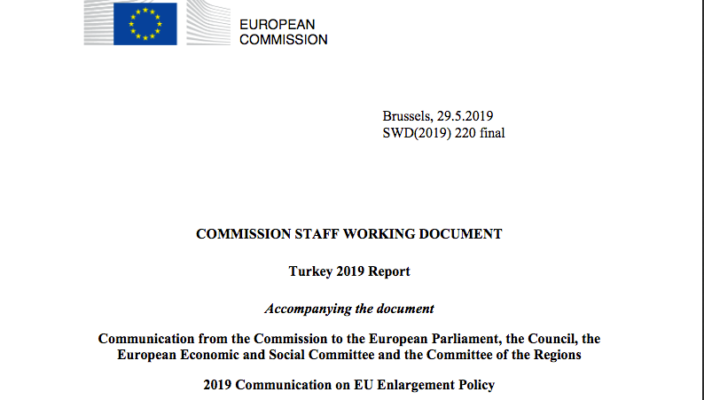 Turkey has continued to move further away from the European Union,” noted the commission in its annual report on enlargement, the European Commission’s  report on Ankara’s progress towards membership

…And not without justification, as the list of outrages perpetrated against its own civilians as well as those under its control in Turkish-occupied parts of Kurdish Syria (Rojava) grows. Now the European Commission just added to the list by downplaying Turkish prospects, once again, of entry to the European Union…

Reasons identified by the EU include its ongoing slide into “authoritarian rule”, deteriorating conditions in courts, prisons and the economy… to name just a few.

“A crackdown following a failed coup in July 2016, a shift to a powerful presidential system with few checks and balances and closer ties with Russia have alarmed western leaders and financial markets alike, sending the value of the lira tumbling.” the Irish Times recently reported. “Turkey’s hopes of joining the European Union are fading…”

Negotiations continued between 2006 (when “…the Council decides that eight negotiating chapters cannot be opened and no chapter can be closed until Turkey meets its obligation of full, non-discriminatory implementation of the additional protocol to the Association Agreement”) and 2016,  through Turkey’s military assault on its south-east with allegations quickly following of war crimes and gross human rights abuses against its Kurdish citizens… Then in January 2016 “…the EU-Turkey high-level political dialogue and high-level energy dialogue take place.” Since then negotiations have stalled… By the summer of 2018 the EU General Affairs Council said “Turkey’s accession has come to a standstill.”

“‘The Council notes that Turkey has been moving further away from the European Union. Turkey’s accession negotiations have therefore effectively come to a standstill and no further chapters can be considered for opening or closing and no further work towards the modernisation of the EU-Turkey Customs Union is foreseen,’ the council’s conclusions stated.”

“Turkey has continued to move further away from the European Union,” noted the commission in its annual report on enlargement, the European Commission’s  report on Ankara’s progress towards membership.

The European Commissions’ Press Release  on May 29th states:

“The broad scale and collective nature of measures taken since the attempted coup under the state of emergency, such as widespread dismissals, arrests and detentions, continued to raise very serious concerns”.

…to say the least. The Report continues:

Attacks on the State Apparatus:

“During the state of emergency, 36 decrees were issued constraining certain civil and political rights, as well as defence rights, expanding police powers and those of prosecutors for investigations and prosecutions as well as foreseeing the dismissal of more than 152 000 civil servants, including academics, teachers and public officials.”

Now, despite the ending of the state of emergency most of these measures have been consolidated by the current Turkish regime with a mere 5,250 public employees being reinstated, (65,156 of the 152,000 complaints being rejected, with 55,714 applications still pending, we are told).

Likewise “Since there are no hearings, there is a general lack of procedural guarantees for applicants and decisions are taken on the basis of the written files related to the original dismissal, all of which calls into question the extent to which the Inquiry Commission is an effective judicial remedy.”

“Many human rights defenders, civil society activists, media, academics, politicians, doctors, lawyers, judges and lesbian, gay, bisexual, transgender and intersex (LGBTI) people, are still detained – sometimes without indictment, and are facing smear campaigns by the media and senior politicians. The space for civil society organisations working on fundamental rights and freedoms has further shrunk, notably exemplified by the introduction of further administrative obstacles. The rights-based organisations closed down under the state of emergency have not been offered any legal remedy in respect to confiscations.”

As to Turkish President (and Chairman of the ruling Justice and Development Party), Recep Tayyip Erdoğan (“Democracy is like a tram; you get off when you have reached your destination.” Istanbul, 1996):

“The new presidential system has centralised power in the hands of the executive and significantly curtailed the Parliament’s legislative and oversight functions. Since July 2018, the Parliament has adopted 17 pieces of legislation, including controversial changes to its rules of procedure. Ministers no longer appear before Members of Parliament, who can ask only written questions.”

With the result that:

“The presidential system, including the abolition of the position of Prime Minister and other functions such as Under Secretaries in Ministries, has led to greater politicisation of the public administration. The President now has the power to nominate the heads of the vast majority of public regulatory authorities”

The fate of the opposition likewise gets a mention:

“Growing political polarisation, especially in the run-up to the March 2019 municipal elections continues to prevent constructive parliamentary dialogue. The marginalisation of the opposition, notably the People’s Democratic Party (HDP) continues, and many HDP lawmakers are detained. The long-standing shortcomings of the system of parliamentary immunity have not been addressed.”

Ongoing attacks on the pro-Kurdish opposition HDP has also recently resulted in:

“After the municipal elections, the Supreme Election Council declared four elected mayors and members of municipal councils ineligible to assume office in the south-east of Turkey, even though their candidacies had been validated before the elections….”

…to say nothing of the annulled election in Istanbul (scheduled for a re-run on 23 June).

“The decisions by the Supreme Election Council to re-run elections in Istanbul as well as to grant the mayorship of individual municipalities in the south-east to second-placed candidates are a source of serious concern regarding the respect of the legality and integrity of the electoral process and the institution’s independence from political pressure. They go against the core aim of a democratic electoral process – that is to ensure that the will of the people prevails.”

“…continuing arrests and dismissals of local politicians and appointment of trustees as well as the arbitrary nature of these appointments deprived voters of political representation at local level, and seriously risked damaging local democracy.”

Almost 4 years since the collapsed peace talks and the military incursion with its now notorious human rights outrages against both militants and civilians in the Kurdish areas the EU recognises that the situation has not improved:

“The situation in the south-east has continued to be challenging, despite an improved security environment. The Government continued security operations against a background of the recurrent violent acts by the Kurdistan Workers’ Party (PKK), which remains on the EU list of persons, groups and entities involved in acts of terrorism. While the Government has a legitimate right to fight terrorism, it is also responsible for ensuring this is done in accordance with the rule of law, human rights and fundamental freedoms. Anti-terror measures need to be proportionate. Despite some reconstruction, only few internally displaced persons have received compensation. There were no visible developments on the resumption of a credible political process to achieve a peaceful and sustainable solution.”

Not that it can balance the casualties, heartbreak and violence perpetrated by a regime that apparently sees war against its own people as the continuation of politics by other means, the European Commission also adds to its long list numerous concerns at other aspects of the current Turkish State:

Changes to the civil service system have further increased the politicisation of the administration. (Merit-based, competitive appointments for senior managerial positions remain the exception. )

The fight against corruption has likewise taken a beating:  “There was backsliding since dismantled preventive bodies have not been replaced by an independent body, in line with the United Nations Convention against Corruption to which Turkey is a party.”  Overall, the report tells us, corruption in Turkey is widespread and remains an issue of concern.

In terms of other human and fundamental rights: there has been “serious backsliding” in the areas of freedom of expression, assembly, and association and in procedural and property rights. No changes have been made to the legislation introduced immediately after the state of emergency, which removed crucial safeguards protecting civil society activists, human rights defenders, journalists, academics and others from abuses.

The rights of the most vulnerable groups and minorities, including the Roma, need better protection. Gender-based violence, discrimination, hate speech against minorities, hate crime and violations of human rights of LGBTI persons are still a matter of serious concern.

Trade union rights continue to be under severe pressure.

As for the prison system in Turkey:

As of December 2018, the total number of people in prison without indictment or pending trial is 57,000, “more than 20% of the prison population”. There is overcrowding and conditions are deteriorating. Severe restrictions on freedom of expression continued and the trend for prosecution of writers, social media users and other members of the public, even children, for insulting the President has dramatically increased.

Finally the lack of transparency as to media ownership continues to cast doubt on the independence of editorial comment.

…Well, corralling migrants and refugees and preventing them from travelling farther into the EU countries was considered one of the few good points in an otherwise bleak litany of abuse against its own citizens.

It has been pointed out that the EU relies on Turkey (with €6 billion of its finances currently “being mobilized” to this end) to house 3.6 million Syrians fleeing the civil war, many of whom would otherwise seek refuge in Europe. The Commission applauded Ankara for reducing the number of people trying to cross into Greece on makeshift vessels:

“Turkey made good progress in the area of migration and asylum policy and remained committed to the effective implementation of the March 2016 EU-Turkey statement. The declining trend in irregular crossings from Turkey to the Aegean islands since the entry into force of the Statement was supported by intensified efforts by Turkey’s law enforcement agencies. Turkey sustained its outstanding efforts to provide massive and unprecedented humanitarian aid and support to more than 3.6 million registered refugees from Syria and around 370 000 registered refugees from other countries, thus hosting the largest refugee community in the world.”

Turkey, itself, not pleased with the report, was at least pleased that the PKK (Kurdistan Workers’ Party) in Turkey was still recognised as a “terrorist” organisation despite an ongoing international campaign to have it delisted and so support the resumption of much needed peace talks.

As in June 2018, Turkey rejected the findings, seeing  them as  showing that the “EU has been held captive by an anti-Turkish mentality” (Andalou)

The report does not accurately assess the current situation in Turkey, especially in its claim that Turkey had distanced itself from the bloc, Kaymakci told a news conference in Ankara.

Ankara expects its European allies to support its fight against security threats, he emphasised.

Kaymakçı also said: “The EU, which gives the impression that it is moving away from its founding principles, unfortunately, is unable to approach our country [Turkey] objectively and make clear analysis of the current situation within the country because of its prejudices coming from its own problems.”

Thus, while regarding European Union membership “Negotiations have… effectively come to a standstill”, Turkey still remains a key member in the US-led NATO alliance, with its second largest army and a track record now of using it with impunity against its perceived enemies (mostly Kurds) with the complicit silence of this western cabal of arms dealing powers… who should know better and, despite all their human rights rhetoric, need to be challenged themselves over their own often cynical tolerance for a variety of human rights abuses and their inability (or unwillingness) too often to demand protection for “the rule of law, human rights and fundamental freedoms”…