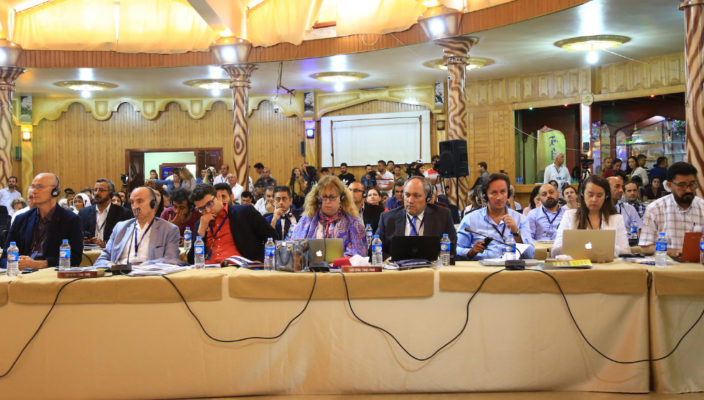 The International Forum on ISIS was organized by the Rojava Strategic Research Center (NRLS) in the Beylesan hall in Amude (province of Qamishlo, Rojava)

The International Forum on ISIS was organized by the Rojava Strategic Research Center (NRLS) in the Beylesan hall in Amude (province of Qamishlo, Rojava).

At the invitation of Rojava Center for Strategic Studies (NRLS), the International Forum on ISIS: Dimensions, Challenges and Confrontation Strategies was held in the city of Amude in North and East Syria. The forum was attended by more than 200 individuals, including politicians, researchers and representatives of civil society institutions from multiple countries. Over the course of three days, the participants discussed various aspects of ISIS terrorism, including political, historical, military, security, cultural, religious, economic, social, and human rights, as well as the issue of women and the persecution of women through their direct, written or visual contributions and discussions. Participants who could not attend also participated in the forum via videos, letters and messages.

The participants appreciated the pioneering role played by the People’s and Women’s Protection Units (YPG and YPJ) and Syrian Democratic Forces (SDF) in ending ISIS physical presence with the support of the International Coalition Against Terrorism. They also praised the secure and stable conditions enjoyed by the self-administration areas of North and East Syria.

We, as the administration of Rojava Center for Strategic Studies (NRLS), express our deep thanks and appreciation to all the participants and their valuable discussions and questions; we raise our recommendations to the international community. These recommendations are the most important points agreed upon during the forum sessions aimed at total elimination of terrorism, and prevent ISIS from reorganizing itself and destabilizing security and stability in Syria, the Middle East and the world.

Below are the recommendations: